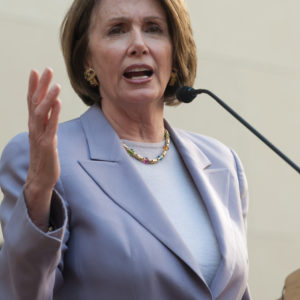 No Love for Nancy Pelosi Even in Liberal Northeast

Former–and possibly future–Speaker of the House Nancy Pelosi has already become an issue in New Hampshire’s midterm elections. And not in a good way.

As reported at NHJournal, of the nine Democrats seeking their party’s nomination in the First Congressional District primary, the number who have committed to supporting Pelosi for speaker is…zero.  As it turns out, they may be on to something.

A new Morning Consult/Politico poll finds that both among Democrats nationally and voters in the liberal Northeast, Rep. Pelosi (D-CA) is surprisingly unpopular. When asked “In thinking about the 2018 midterm elections in Congress, would an endorsement from each of the following make you more or less likely to vote for a candidate?” an astonishing 49 percent of Hillary Clinton supporters said an endorsement from Pelosi would made them less likely to support a candidate. Only 38 percent said it would make them more likely.

More locally, 58 percent of registered voters in the deep-blue Northeast would be less likely to support Pelosi-backed candidates.

Morning Consult also reports another disturbing trend for Democrats:  Trump voters are more motivated to vote in the November midterms than Hillary Clinton voters, 68 to 58 percent.  More broadly, they report 84% of Republicans describe themselves as motivated, while 80 percent of Democrats say the same.

One glimmer of good news for Democrats in New Hampshire and beyond:

The poll also shows Democrats leading on the generic congressional ballot by 5 percentage points, 43 percent to 38 percent. That is slightly closer than Democrats’ 7-point lead in last week’s poll, 42 percent to 35 percent.