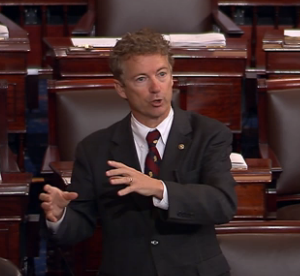 Sen. Rand Paul (R-KY) filibusters an extention to Section 215 of the Patriot Act

NSA Phone Spying Is ‘Winding Down’ — But It’s Not Ending

Posted to Technology May 26, 2015 by Giuseppe Macri

After two failed Senate votes over the weekend to renew expiring portions of the Patriot Act, the National Security Agency has begun winding down its mass telephone data surveillance program ahead of a last-minute bid to save it on Sunday.

The Senate adjourned amid a cloud of uncertainty this weekend after failing to pass neither legislation reforming Section 215 of the Patriot Act, which authorizes the NSA to collect and store all Americans’ landline call metadata, nor a short-term extension to the provision due to expire on June 1.

Saturday’s pre-dawn showdown in the upper chamber began when Republican Majority Leader Mitch McConnell gave reform supporters a chance to vote on the U.S.A. Freedom Act, which reauthorizes Section 215 and two other provisions due to sunset but takes the collection and storage of bulk phone records out of NSA’s hands.

Despite a 338-88 mandate from the House, the bill failed to move in the Senate for the second time in two consecutive sessions, falling three votes shy of the 60 needed to end debate and move to a vote for passage.

Though the bill touted more support than last year, the outcome was one predicted by McConnell, who favors a clean extension to the provisions due to expire. The senior Kentucky senator’s second gambit — that senators would pass at least a temporary extension ahead of the week-long Memorial Day recess — didn’t play out, as lawmakers led by fellow Kentuckian and presidential hopeful Rand Paul voted down consideration of a two-month extension.

The upper chamber failed to bridge the 60-vote gap for another round of extensions proposed by McConnell ranging from eight days down to two before the decision to recess, with the majority leader demanding colleagues return on Sunday May 31 — just hours before the deadline — to try again.

“The Senate has refused to reauthorize bulk data collection. I am proud to have stood up for the Bill of Rights,” Paul tweeted Saturday. “But our fight is not over.”

“The Senate will return one week from Sunday. With your help we can end illegal NSA spying once and for all.”

Though Paul is calling for a complete expiration of Section 215, senators including Vermont Democrat Patrick Leahy and Utah Republican Mike Lee, who sponsored the Freedom Act, still have hope they can convert three of their colleagues by Sunday. The likely candidates include Illinois Republican Mark Kirk, who initially voted in favor of the bill before changing his vote, and Republican Mike Enzi, who was out of town and didn’t vote.

The Obama administration has already begun winding down the bulk telephone surveillance program according to a Justice Department memo circulated around Capitol Hill last week, which warned lawmakers the NSA would be forced to start shuttering the program to avoid running afoul of the law if Congress failed to act by Friday.

“We’ve said for the past several days that the wind-down process would need to begin yesterday if there was no legislative agreement,” an administration official told multiple news outlets Saturday morning. “That process has begun.”

According to the same official, the administration has also forgone seeking the necessary legal approval for the bulk telephone surveillance program from the Foreign Intelligence Surveillance Court, which must be renewed every 90 days.

However Congress or the administration proceed, some form of the bulk telephone surveillance program may continue without action from either thanks to a grandfather clause in a Patriot Act statute, which would allow existing investigations, as well as future investigations of crimes committed before June 1, to continue as if the law had never expired.

Any data collected and related to a Foreign Intelligence Surveillance Act order for any of those investigations would still be permissible for the NSA to use, and would only be subject to the existing data minimization procedures.

“It is a pretty safe bet that the government will continue to use that data for the duration of those existing investigations regardless of what happens between now and June 1,”associate counsel at the Law Office of Mark Zaid and national security lawyer Bradley Moss told InsideSources. “The debate in Congress is about whether the government will be afforded that scope and type of authority going forward.”