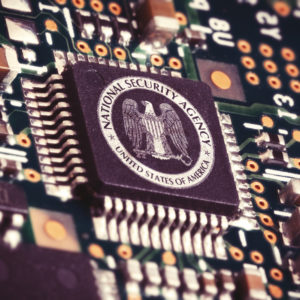 MARCH 16, 2015: Illustration of a spying CPU inside a computer with the NSA logo on it.
News

The National Security Agency is raising the stakes in the debate to renew sweeping surveillance powers contained in Section 702 of the Foreign Intelligence Surveillance (FISA) Act, arguing the law “saves lives” and that failing to reauthorize it could cost them.

“Last year a foreign attack resulted in the deaths of more than 20 people,” the signals intelligence agency said in a rare but vague blog post on its website Thursday. “Who was behind it? Had they also taught others how to carry out such malicious acts? It was NSA’s Section 702 collection that revealed the identities of the overseas terrorists who were responsible.”

Section 702 authorizes NSA to tap the physical infrastructure of internet service providers, like fiber connections, to intercept foreign emails, instant messages, and other communications belonging to foreign nationals as they exit and enter the U.S. But according to NSA, the program also “incidentally” sweeps up the communications of Americans corresponding with, and until recently, merely even mentioning foreign targets.

“This collection provided the necessary insights and reporting on the attack that refuted the terrorist organization’s denial of any involvement,” the NSA post continues. “Specifically, Section 702 collection provided a direct claim of responsibility from the terror group’s leaders and included a list of terrorists trained for the operation. This was crucial for supporting timely U.S. and coalition force planning and operations against terrorists in the region.”

The statute received increased criticism from Congress, federal courts, digital and civil rights groups this year as it approaches expiration at the end of December. Experts say it likely results in tens of millions of warrantless intercepts of Americans’ communications, and prolific NSA leaker Edward Snowden and Democratic privacy hawk Sen. Ron Wyden of Oregon suggest it could be manipulated to target communications that are entirely domestic.

NSA and others in the intelligence community are pushing back against those arguments, going so far as to pressure Congress to permanently enact the 2008 FISA Amendments Act, under which Section 702 is codified.

The post on NSA’s website came one day after the Office of the Director of National Intelligence (ODNI) released a cache of documents describing the training NSA signals intelligence analysts go through and annual reports on the number of intelligence reports it disseminated to other agencies containing data on Americans. Those documents were released pursuant to a Freedom of Information Act request related to a lawsuit the American Civil Liberties Union brought against NSA in New York.

Wyden, Kentucky Republican Sen. Rand Paul, and others have for years asked former Director of National Intelligence James Clapper and now Dan Coats, the nation’s new top spy, for an estimate of how many Americans are swept up in Section 702 collection. Both, alongside NSA Director Adm. Mike Rogers, say its impossible to calculate without violating the very privacy rights Wyden, Paul and others are seeking to protect, since it would require looking for Americans directly in the NSA’s broad dragnet.

One report covering Sept. 1, 2014 to Aug. 31, 2015 shows NSA disseminated 4,318 intelligence reports containing Section 702 information with at least one reference to a U.S. person. However this only includes U.S. person data that made it into a report, not data on U.S. persons the NSA collects and stores, but hasn’t yet queried.