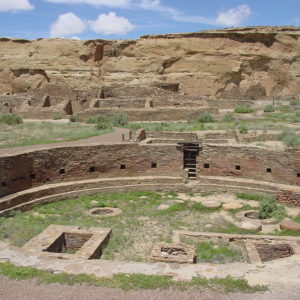 Legislation creating a 10-mile buffer zone to permanently protect New Mexico’s Chaco Canyon region from oil and gas extraction passed the U.S. House last week with bipartisan support. However, the New Mexico Oil & Gas Association (NMOGA) views the bill’s passage as premature — as the U.S. Interior Department is in the midst of evaluating the ban’s repercussions — and calls the legislation more political than advantageous to the area.

The Greater Chaco region is culturally and historically important to the Navajo Nation and other pueblos in New Mexico. The land is distributed between BLM, state trust land holdings, the Navajo Nation and individual allocations. More than 90 percent of BLM land in the region has been leased for oil and gas.

“Time and again we’ve come to the defense of Chaco Canyon,” said Heinrich during a media call following the passage of the House bill. “We’re going to continue doing that until we get permanent legislation withdrawing this area from mineral entry. We’re going to stick with this until we see finality.”

Earlier this year, New Mexico Land Commissioner Stephanie Garcia Richard issued a moratorium on oil and gas lease sales on state trust lands located within the 10-mile buffer zone. The Interior Department, which oversees BLM, also issued a one-year ban on drilling within 1,500 acres of land adjacent to the park after Interior Secretary David Bernhardt toured the site and met with leaders of the Navajo Nation and New Mexico pueblos.

The Interior Department decided to conduct a resource management plan to determine how to protect the Chaco Canyon National Park region, without having a negative effect on the state’s booming oil and gas industry and communities that rely on it for their economic success.

NMOGA spokesman Robert McIntyre said the industry has a problem with the House bill as the resource management plan has not been completed.

“The Department of Interior had outlined a pretty good plan to restrict leasing in that 10-mile buffer zone until the completion of the resource management plan, and the legislation really gets ahead of that process,” McIntyre told InsideSources. “If Congress — if our representatives — if they really cared about conducting [a] meaningful and thorough cultural review and really wanted to ensure that we understand fully the resources and the artifacts that we have in that area, they would have allowed that process to occur.

McIntyre also said the House bill sends “a really bad message to the region and it’s even worse when you consider all the ripple effects it will have in that area.”

“A permanent ban would significantly limit the ability of that region and of those communities in that area to build economically,” he said. “Oil and gas is probably the largest industry in that area and the residents there rely on a strong industry in order to grow their local economies. The ban will affect food, restaurants, gas stations and retail [businesses].

However, Haaland — who is a member of Laguna Pueblo — said she was incredibly proud of the legislation and disagreed with NMOGA’s assessment.

“The fight to protect Chaco had a unifying effect, it brought pueblos together with the Navajo Nation and all the communities who share our beautiful land,” Haaland said during the media call. “This administration has been on a mission to lease out every acre it can to extractive industries. New Mexicans are all too familiar with the toxic impacts it has on our air, our water and our health.

“Protecting Chaco should not be a partisan issue.”

During the media call,  Luján praised Haaland and Torres Small for their efforts during a floor debate on the bill. He called the bipartisan vote “significant” and said the bill would “forever protect Chaco.”