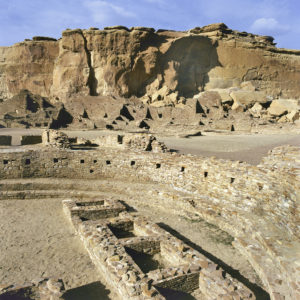 The U.S. House of Representatives just passed a one-year moratorium on oil and gas drilling in a 10-mile buffer zone near Chaco Canyon, a sacred and archaeologically-significant site in a remote part of northwestern New Mexico. Industry representatives and state officials say they aren’t worried about the economic impact of a one-year freeze — it’s the New Mexico congressional delegation’s plan to make the moratorium permanent that has them uneasy.

Asked whether he felt the amendment would be included in the Senate appropriations bill, Luján said: “It simply codified an announcement by a Secretary of Interior that was appointed by a Republican president.”

“I feel confident that this amendment will be included in the final package going to the president,” Luján told InsideSources. “As long as Mitch McConnell takes his responsibility seriously about funding the federal government and moving appropriations bills through the Senate, this is a provision that does have broad support.”

“We’re working with the Pueblo leaders in New Mexico, as well as the leadership of the Navajo nation, as partners that all agree we should be protecting the greater Chaco region — this was the area that was identified,” he said. “

When asked whether he thought the one-year moratorium had a chance of becoming permanent, Luján replied: “The uncertainty is what will Mitch McConnell do.”

“I am confident not only will we receive a hearing and a markup of the legislation to protect Chaco — that I have introduced in the House with my colleagues congresswomen Deb Haaland and Xochitl Torres Small — and is also being carried by United States senators [Martin] Heinrich and [Tom] Udall,” he said. “I’m also confident that we will be able to pass this legislation off the House floor.”

The New Mexico House legislation is using the one-year moratorium as a springing board for permanent legislation.

A spokesman for Heinrich said: “Senator Heinrich is working to make sure the moratorium is in the Senate appropriations bill and will continue to push to get the permanent withdrawal legislation through the Senate.”

Proponents of the oil and gas industry tell InsideSources that although there would be no immediate economic impact on the state from the one-year moratorium, the 10-mile buffer zone is unrealistic and a permanent moratorium will have lasting negative effects.

“I think the real question is whether this is an appropriate action for Congress to be entertaining,” McEntyre told InsideSources. “NMOGA has consistently said that a 10-mile buffer zone is not rooted in any known facts, science, discovered artifacts or resources — it’s kind of an arbitrary number.”

The historic park, located in the San Juan Basin, has been a productive oil and drilling site for more than a century, McEntyre said. “And we’ve always looked out to avoid historical and cultural sites.”

“The impact will come when they start making permanent exclusions and when they start expanding the border around the area,” he told InsideSources. “I think that everybody on the economic side of the issue understands the need for certain historic sites to be respected and protected.

“When they start doing permanent exclusions … that’s when investors will say that New Mexico is not a friendly place to operate and they’ll simply go to where more private land and public land exists,” Pearce said.

“Uncertainty is the biggest thorn in the side of business.”