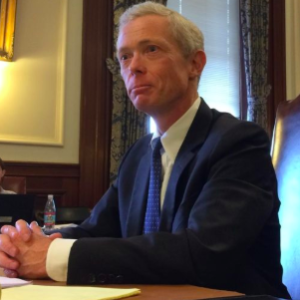 Scott O’Connell is a New Hampshire Democrat and an attorney who’s worked with Gordon MacDonald for more than 20 years. He sums up the Attorney General’s treatment by his fellow Democrats on the New Hampshire Executive Council in one word:

“I’ve known Gordon for 22 years, and the idea that he’s ‘an extremist’ or ‘shocking’ is mind-numbingly crazy,” O’Connell told NHJournal.  “It’s unfounded, and it’s bulls**t.”

When casting his vote against MacDonald’s nomination to become chief justice of the New Hampshire State Supreme Court, Executive Councilor Andru Volinsky said was concerned about the “shockingly extreme views” of politicians MacDonald had supported in the past, in particular former U.S. Senator Gordon Humphrey. Humphrey last held office in 1990.

“Gordon has a 30-year track record of outstanding service and now they think he’s been, what, a closet right-winger the entire time? It’s ridiculous. He’s set a record of exemplary behavior, so they have to go back 30 years to find an excuse to vote against him,” O’Connell said. “It’s just guilt by association.”

According to sources in the Concord and Manchester legal communities, phones have been ringing all day with calls from both sides of the aisle as attorneys bemoan MacDonald’s treatment at the hands of the Executive Council. And the recurring question is, if Gov. Chris Sununu can’t get a qualified candidate with overwhelmingly bipartisan support like MacDonald through the Executive Council, who can he get?

“Nobody,” one Republican strategist told NHJournal. “That’s why he’s not going to try. Everybody knows this had nothing to do with Gordon and everything to do with Sununu.”

New Hampshire Democrats are certainly sending that message, taking social-media victory laps and declaring the vote a defeat for Sununu, not the “extremist” MacDonald.

Some have suggested that Gov. Sununu is over-reacting to MacDonald’s defeat by declaring a “pause” in any movement on nominations. “Why would I bring another name forward knowing that individual is going to be scrutinized…solely on politics, a litmus test that’s never been used ib this state?” Gov. Sununu asked on the Jack Heath radio show this morning. “I’m telling everyone ‘We’re going to take a pause here,’ and it could be a long pause, to be honest.”

Some question this approach. The headline on Kevin Landrigan’s column in the Union-Leader today is “Angry Gov. Sununu Needs to Cool Off, Regroup.” One Democratic insider told NHJournal that Sununu “seems a little unhinged.”

But other Democrats, particularly in the legal community, don’t agree. “There is a lot of anger out here,” one Concord Democrat told NHJournal. “We’re talking among ourselves. Something went really wrong here.”

“I’ve had four angry phone calls today–two from Republicans and two from Democrats,” the GOP consultant said. “The effort to smear [MacDonald] as ‘shockingly extreme’ means every mainstream Republican they know is ‘shockingly extreme.’  I think this might be Andy’s [Volinsky] ‘basket of deplorables’ moment. It’s a big political mistake.”

Still, stopping all nominations could be considered an “extreme” move by Gov. Sununu. Is it?  Democrat O’Connell doesn’t think so.

“I think he’ll keep the seat open. I think he should keep it open. He should let the Council know–if you’re going to play games like this, these are the consequences.”