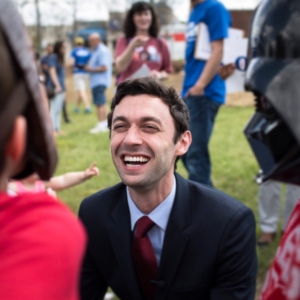 Is Georgia a Trap for Democrats?

A special election in the congressional seat once held by Republican House Speaker Newt Gingrich in the suburbs north of Atlanta has Democrats salivating over the possibility of scoring a major upset. Millions of dollars in support from the national party’s apparatus have poured into the race, which will culminate in a first round of voting on Tuesday. If one candidate secures 50 percent of the vote, he or she will win outright, otherwise, the top two finishers will head to a June runoff.

The left’s favored candidate is Jon Ossoff, a 30-year-old former national security staffer for Rep. Hank Johnson, D-Ga., turned investigative video-journalist. Ossoff has risen from obscurity to national significance on the back of strong poll numbers and an astonishing $8.3 million dollar fundraising haul, the majority of which has already been spent on a systematic advertising campaign. Furthermore, because the fractured Republican field has been stuck in what amounts to an internecine primary fight, the Ossoff phenomenon has emerged as the clear story in the local and national press.

While slipping a fresh-faced rising star into the seat vacated by Health and Human Services Secretary Tom Price would be a huge coup for Democrats, the all-in push in the Peach State has its potential drawbacks. One concern is the opportunity costs. Last week, while money from national donors and paid Democratic strategists continued to flood Georgia’s 6th district, Republican Ron Estes was able to squeeze out a surprisingly narrow victory in another special congressional election in the deep-red suburbs of Wichita, Kansas.

The Democratic Party’s decision to skip the Kansas race drew fire from Sen. Bernie Sanders, D-Vt., over the weekend. Had some resources been diverted from Ossoff to the Kansas Democratic challenger James Thompson, it’s possible the party would have been able to counter a late ad-buy from national Republicans and capitalize on Estes’ close relationship with the state’s unpopular governor, Sam Brownback.

Another more understated concern revolves around what happens to the left’s enthusiasm should their efforts in Georgia come to naught. By funneling so much anti-Trump energy on their young candidate’s shoulders and by failing to manage expectations in the solidly Republican district, Democrats are arguably setting their activists up for a major disappointment.

“If [Democrats] win in Georgia tomorrow, then maybe these rallies create excitement, but if they don’t, then at least the question is: what difference are they making?” asked Joe Scarborough on his MSNBC show Morning Joe on Monday in reference to a series of tax day rallies that were organized in cities nationally over the weekend, including in Atlanta. Those rallies are part of the left’s push to force President Trump to release his tax returns; something the administration does not seem likely to do voluntarily. Scarborough suggested that the Georgia race is becoming a must-win for progressives eager to show that their fledgling grassroots movement can bring about results.

Democrats have previously fallen sway to the siren song of reports of changing demographics in the Deep South state as recently as the last presidential election. Hillary Clinton’s campaign announced its intention to expand the map by contesting red states like Arizona and Georgia in anticipation of an electoral landslide. Clinton not only ended up losing Georgia by over 200,000 votes, but she also suffered from the devastating perception that she was taking working-class white voters in the Midwest for granted. Clinton famously did not visit Wisconsin once during the campaign, which along with Pennsylvania and Michigan, were the rocks upon which her presidential hopes ultimately ran aground.

While there is evidence that Georgia’s well-educated and wealthy Republican 6th district is especially tepid on President Trump—he carried the district by only one point, while Mitt Romney won the area by more than 20 points in 2012—swiping the seat is still seen as a heavy lift for Democrats among political observers. Should Ossoff fail to win the seat outright on Tuesday, Republicans will have ample time to reorganize and line up behind their preferred candidate by the June finale.

The strategy, therefore, represents a high-profile gamble for Democrats in hostile terrain. As Ossoff’s profile has risen, some have called his portrayal of his résumé into question, and local conservative talk radio has harped on reports that Ossoff doesn’t actually live in the district. Should the campaign stretch into the summer, one can expect the attacks accusing Ossoff of being a “carpetbagger” or a tool of Nancy Pelosi to only intensify.

Nevertheless, there are signs that Ossoff’s strong showing in the polls has Republicans rattled. On Monday, the President took to Twitter to wade into the contest and disparage Ossoff’s political stances.