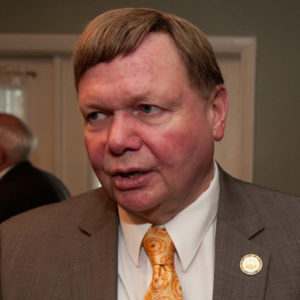 “Anyone should be able to run for the nomination. Donald Trump is the president, and his record should be considered. But until our nominee is chosen by a vote of the people, the party leadership needs to be neutral,” MacDonald told NHJournal.

Not everyone agrees. Bruce Breton, who was very active in Trump’s 2016 campaign in New Hampshire, finds the party’s policy of neutrality “deeply flawed.”  He has abandoned his bid for NHGOP Vice Chair in part because running for the office “would be contrary to my continued support of President Trump. As per our bylaws I would have to remain neutral in the upcoming 2020 campaign. It is my strong belief that those bylaws should be changed to reflect that the NHGOP would support an incumbent president.”

But MacDonald was adamant. “I understand the logic of wanting to support an incumbent president in your own party. But the nomination is something that is bestowed upon them by the voters,” MacDonald said, adding that the candidates and offices are irrelevant.

“This has nothing to do with Trump. We were neutral in 1992 when George H. W. Bush was president [and challenged by Pat Buchanan].  And it’s not just the presidency. Governor, senator, what have you—the party needs to remain neutral.”

MacDonald has served as state party chair three times, always as an appointee and never as an elected candidate. On Tuesday, he announced he won’t be running to keep the job.

“I’ve always enjoyed it, but it’s never been easy. People don’t leave the job when things are going well,” he noted wryly. “It’s an intense and exhausting experience.”

When news broke of MacDonald’s decision, Gov. Chris Sununu released a statement offering “sincere thanks to Chairman MacDonald for his steady leadership over these past few months. He had to step up to take on a tough challenge, served admirably, and I sincerely hope Wayne stays involved in the years ahead — the Republican Party is better off with Wayne MacDonald at the table.”

MacDonald told NHJournal he agreed with those who say the job should be a paid, full-time position for the GOP as it is for the New Hampshire Democratic party, adding: “I’m Scottish, so if they had offered to pay me, I wouldn’t have said ‘no.’”

“One big advantage Democrats have had is continuity. They’ve been able to build on their experiences from one cycle to the next. We’ve had very few chairmen serve back-to-back terms.”

MacDonald is right. Former NHGOP chair Fergus Cullen tweeted out the list of state party chairs since 2000. There have been eleven already, and only one—Jennifer Horn—served two consecutive terms.  “During this time, NHDems have had just two. They stuck with Kathy Sullivan and Ray Buckley not only after wins but after losses too,” Cullen tweeted.

MacDonald declined to endorse anyone to replace him, but he did share his biggest concern for the next chairman: “Fundraising.  That’s got to be the number one job.”

“And I don’t have a problem with going to Washington, DC for funding, as the Democrats do, that’s fine. The problem is that there isn’t this pile of money waiting for us in Washington to just scoop up and take back to New Hampshire. We’re going to have to compete for money there too,” MacDonald said.

He pointed out the example of former party chairman John H. Sununu. “He really was in a class by himself when it comes to state chairmen. He had been governor, he had all the contacts, and he raised a lot of money for the party.  But even he didn’t meet the $1 million fundraising goal he set for himself.”

“No matter who becomes the next chairman, fundraising is always hard.”