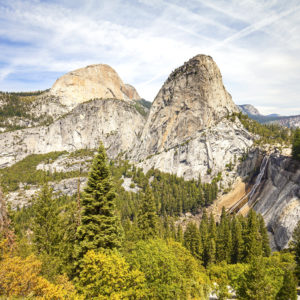 Federal land in the American west shouldn’t be put under the control of states, the National Park Service director said Monday.

“I would say the public land estate is being well managed and would continue to be best managed by the federal government,” Jonathan Jarvis said in a speech at the National Press Club.

The comments were seen as a rejection of this year’s Republican Party platform, which calls for transfer of federal land to states, and they came as the director, clad in his olive green Park Service uniform, delivered remarks for the centennial of the agency where he’s worked for four decades.

Jarvis warned against “selfish interests” seeking to develop the parks and, separately, acknowledged dissipation of bipartisan backing for them in Washington.

Though the parks have enjoyed the support of Democrats and Republicans for most of their history, some conservatives are now pushing for change as the Park Service has a $12 billion maintenance backlog.

“Part of the issue in my estimation is … a political agenda [that says] nothing in government is good,” Jarvis said.

To mark the centennial, the director argued that America must engage a new generation around the idea that parks help tell the nation’s story in addition to showcasing its beauty.

Parks are currently experiencing record visitation, but Jarvis is focused on maintaining that enthusiasm after the 100-year celebrations die down.

“We cannot take the future of conservation for granted,” he said. “We must use the power of our parks and public lands to inspire and empower a new generation of conservation and historic preservation.”

National parks were dubbed “America’s Best Idea” in a 2009 Ken Burns documentary, and they were championed early on by Republican President Teddy Roosevelt.

Yet writing for InsideSources earlier this year, a pair of progressive wonks from the Center for American Progress lamented “the ideological assault” on these public institutions  being waged “in the halls of Congress, on the presidential campaign trail, and by the political network of the billionaires Charles and David Koch.”

“The goal of the anti-parks movement is simple: to call into question the very idea of public ownership of our parks, wildlife and public lands,” wrote Matt Lee-Ashley and Jenny Rowland. “By dismantling the social consensus underpinning this idea — a consensus that has been forged over the past century — they hope to facilitate the hand-off of public lands to the private ownership of mining, energy, livestock and timber companies.”

Defenders of the new Republican platform language note that it doesn’t specify whether national parks would necessarily be included in federal land given to states, so some ambiguity remains on the subject.