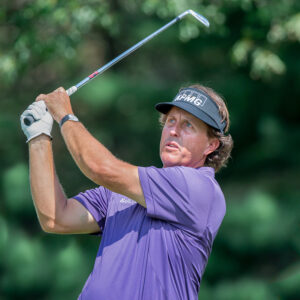 Golf may not be a contact sport, but the ongoing dispute between the PGA and some of its most high-profile players is starting to sound like the MMA.

That is the takeaway from an ongoing battle over the PGA Tour’s controversial proposal to ban players who compete in a new upstart league. PGA Tour Commissioner Jay Monahan last year declared that any players who sign with the Saudi-backed Super Golf League could face a lifetime ban from the PGA. The new league is being fronted by longtime golf veteran Greg Norman’s LIV Golf Investments.

Monahan and the PGA Tour have some latitude to ban players from the tour—the bylaws of the Tour state, in part, that golfers may be booted from the competition if they participate in rival events that “significantly and unreasonably harm PGA Tour and [its] sponsors.”

What is unclear is if that prerogative extends to a blanket ban of an entire league. Alden Abbott, the former general counsel for the Federal Trade Commission, wrote at Inside Sources in February that the ban, if enforced, “would trigger a slam-dunk antitrust lawsuit by Norman’s upstart league, the players, or even federal antitrust enforcers who have made it a priority to protect workers’ ability to ply their trade for whomever they please without interference from corporate giants.”

Greg Norman himself agrees. In a letter to Monahan late last month—one that cited Abbott’s legal analysis—Norman accused Monahan of “unfair labor practices” and slammed what he said was the PGA’s “web of player restrictions.” The golf pro strongly intimated that he would be taking legal action if Monahan pursued the policy.

“When you try to bluff and intimidate players by bullying and threatening them, you are guilty of going too far, being unfair, and you likely are in violation of the law,” Norman wrote adding, “Commissioner — this is just the beginning. It certainly is not the end.”

The threat of legal action is just one headache Monahan and the PGA Tour are currently facing over the proposed ban. Blowback from the diehard golf industry is another. At the Sportico website, Corey Leff argued it is “fair to wonder if the PGA Tour … would benefit from the emergence of an upstart tour taking a vastly different approach.”

“In theory, success could serve as a rising tide and provide a roadmap for the change needed to appeal to the next generation of golfers and fans,” Leff argued.

Gil Fried, a professor and sports law specialist at the University of West Florida, told Inside Sources that “if enough golfers leave for a fixed paycheck regardless of how many events they win/place, it might drain the PGA of some young up and coming stars.”

“The ripple effect can then impact sponsorship opportunities for some players,” he said. “Imagine if a player was sponsored by Nike as an example and they switch to the new league? Would Nike be allowed to terminate the sponsorship? If that were to happen, based on explicit or implicit pressure, there might be a third-party contract interference claim against [the PGA Tour].”

“Thinking about historical comparisons,” she said, “we’ve got the international sport community’s banning of competition with South African teams during apartheid, and when New Zealand violated that ban they were punished… except not entirely, because the IOC decided to let New Zealand participate in Montreal ’76 anyway, and then African nations (plus Iraq and Guyana) boycotted.”

The PGA, meanwhile, recently faced fiery criticism from one of its long-competing athletes, golf legend Phil Mickelson, who told sportswriter Alan Shipnuck last year that he backed the Super Golf League in large part to “reshape how the PGA Tour operates.”

“They’ve been able to get by with manipulative, coercive, strong-arm tactics because we, the players, had no recourse. As nice a guy as [PGA Tour commissioner Jay Monahan] comes across as, unless you have leverage, he won’t do what’s right,” Mickelson added.

In that same interview, Mickelson also made comments that appeared to be dismissive of Saudi Arabia’s problematic human rights record. He later apologized and says he is on a self-imposed sabbatical.

The optics of a longtime golf veteran willing to work with the Saudis in order to gain “leverage” over the PGA Tour may ultimately serve to expose what are reportedly longstanding grievances many professional golfers have with the PGA Tour, the most important competitive golfing organization in the country.

Even legendary golf player Tiger Woods recently appeared to agree in principle with some of Mickelson’s gripes about the PGA Tour. The famously understated Woods, known for his laconic and uncontroversial press conferences, admitted at a press conference last month that players have “struggled [for] decades” with the Tour’s handling of media rights.