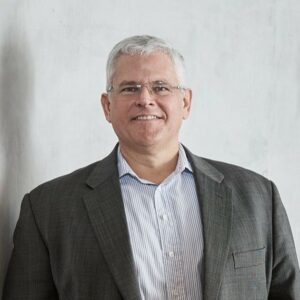 When Martin King first heard his boss announce their company’s goal of “trying to achieve a smoke-free world,” he confesses it sounded like a “crazy possibility.”

Then again, King is CEO of PMI Ameria, the U.S. representative of Philip Morris International, the world’s largest publicly-traded tobacco company. No wonder the comment raised eyebrows around the corporate watercooler.

At the same time, King says, he knew it could be done.

“When Andre [PMI CEO André Calantzopoulos] made that announcement, I was running PMI Asia, and we were launching our ‘heat-not-burn’ product in Japan. And we were already seeing tremendous uptake from combustible cigarette smokers to this new option. That gave us the confidence to say we can fully convert the world’s smokers of combustible cigarettes to other products,” King said.

“And the results that we’ve had over the last four or five years have shown that, that path is entirely possible.”

Phrases like “combustible cigarettes” and “heat-not-burn” are part of the new post-cigarette conversation going on, both in the tobacco industry and among health professionals. The rise of new smoking products with far fewer health risks, products smokers are actually willing to use, changes both the commercial and public health calculations.

Industry leaders like King sincerely believe that, after years of conflict, the two can be partners today, to everyone’s benefit. How? Follow the science.

Getting people to stop smoking traditional — aka “combustible” — cigarettes is a good thing. Alternatives to cigarettes, like heat-not-burn products, are better at getting adult smokers to quit than simply hoping they will ‘just say no.’  Set aside assumptions and embrace these facts, King says, and public health will improve.

“You have 35 or so million smokers in the U.S. who would greatly benefit from having a better choice than traditional cigarettes,” King said. “If they’re not going to quit, they really would be better off switching to non-combustible products. Unfortunately, not enough attention is being focused on these smokers, and what is right for them. There’s too much vitriol about tobacco companies and not enough concern for these people.”

King acknowledges PMI’s motives aren’t purely altruistic. They’ve made an $8 billion investment in research and development of smoke-free products. Their flagship items are the “heat-not-burn” IQOS (pronounced “EYE-kose”) products, designed to give smokers an experience similar to cigarettes but with far fewer health risks. It’s had a successful rollout in Japan, Italy, and other parts of the world, shifting millions of adult smokers off cigarettes.

PMI has set an aggressive target for smoke-free and “beyond nicotine” products, recently announcing their ambition for total net revenues from smoke-free products to reach more than 50 percent by 2025. They also want their products in 100 markets, up from 64, by that date as well.

In the U.S., IQOS is licensed to Altria and is currently available in the Atlanta, Richmond, Va., and Charlotte, N.C. markets. Last year, the Food and Drug Administration (FDA) issued a modified risk tobacco product (MRTP) marketing order for the IQOS tobacco heating system.

“Unfortunately, there’s a big chunk of people who think it’s the nicotine that’s causing the harm,” King said, “And therefore if a product still has nicotine in it, they wonder if smokers are really getting a [health] benefit by switching. So you have to start with the basic education that nicotine really isn’t the problem. The problem is the burning and the stuff that comes from burning.”

For some anti-smoking organizations, acknowledging that fact is a bridge too far. They’ve pressured regulators to treat alternatives to smoking like heat-not-burn and vaping as though they’re as risky as regular cigarettes. The Campaign for Tobacco-Free Kids, for example, has declared vaping “an epidemic,” and successfully pushed to ban the sale of e-cigarettes in communities like San Francisco.

Ironically, cities and states that have been e-cigarette or vaping products haven’t banned the sale of traditional cigarettes. As public-health advocates have attacked these alternatives, more Americans have gone back to smoking the old-fashioned — and more dangerous — way.

King acknowledges the need to balance outreach to adult smokers with accurate information that will help them make the switch on the one hand, and strategies to keep the new products out of the hands of children and teenagers on the other.

“I think this is a case where calm, considered thinking about the issue would result in people understanding that you do have to very aggressively address the youth initiation and unintended users issue,” King said. “This is what’s behind the drive to ban these various products. We do have to be serious about that and demonstrate we’re doing everything possible to keep these products out of the hands of unintended users.”

At the same time, King says, it’s wrong to leave 35 million adults without the information they need to make better choices.

“Unfortunately, there are a number of groups out there who are conflating these issues, who are not recognizing — despite the science — that these really are better choices for smokers.  It’s causing a lot of confusion and it’s harming smokers by not giving them accurate information.

“So we’re trying really hard to reach out an olive branch to civil society and the different groups that are working on the issue of tobacco harm and say, ‘Hey guys, we should be trying to help smokers, make sure they have the facts, and you’re not doing that,'” King said.