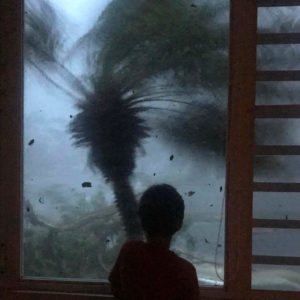 In this early morning Sept. 20, 2017 photo, a young boy looks out the window as strong winds brought on by Hurricane Maria bend a palm tree and send debris flying, in Juncos, Puerto Rico. As rains began to lash Puerto Rico, Gov. Ricardo Rossello warned that Maria could hit "with a force and violence that we haven't seen for several generations." (AP Photo/Linda Rodriguez Flecha)
[IS] Opinions

Editor’s Note: For an alternative viewpoint, please see: Counterpoint: Puerto Rico’s Dual Crises Show Its Territorial Status is the Worst of Both Worlds

Puerto Rico’s hurricane-battered economy is in the most desperate of straits and the island would seem to be on the cusp of a humanitarian crisis. In those circumstances, the renewed debate about the desirability of Puerto Rican statehood is an unwelcome distraction from the immediate task at hand, which must be to build consensus for a far-reaching economic reconstruction program for the island.

Not only is Puerto Rican statehood not going to happen for obvious U.S.-related political considerations, it is also far from clear whether statehood would provide the island with economic benefits relative to those that it currently enjoys as a U.S. territory under the 2016 Promesa Act.

It is too early to evaluate how large a hit the Puerto Rican economy will have taken from Hurricane Maria. However, there is good reason to fear that absent an early and comprehensive U.S.-sponsored economic rescue package, the island’s economic downward spiral could accelerate. After all, it is not expected that the island’s electricity grid will be restored for several months and it is known that the island’s agricultural output has been decimated while its transport and water supply infrastructure has been severely damaged.

Wide experience with IMF-type economic stabilization programs would strongly suggest that no single silver bullet is going to turn around an economy in as difficult a position as that in which Puerto Rico now finds itself. Rather, if the Puerto Rican economy is to get back onto its feet anytime soon, it will need a coordinated and comprehensive economic program involving far reaching action by the Puerto Rican government, the U.S. Congress and Puerto Rico’s creditors.

Given the urgency that Puerto Rico puts in place an economic reconstruction program as soon as possible, it is to be regretted that it is allowing itself to be distracted by a renewed and futile debate on the benefits of statehood. The truth of the matter is that however unfair the lack of representation might be, Puerto Rican statehood is not going to happen for much the same reason that District of Columbia statehood is not going to happen. A Republican controlled Congress and White House are simply not going to give representation to Democratic-leaning territories that would change the political balance on the mainland.

It is also far from clear whether statehood would confer meaningful economic benefits to the island over its present status as a territory. One would think that with the threat of massive migration to the mainland, Puerto Rico could extract as much economic support from the Congress as a territory than it would be able to do as a state.

It would also seem that Puerto Rico would have much to lose in terms of restructuring its debt since U.S. states do not enjoy bankruptcy protection. Presumably as a state Puerto Rico, too, would lose its ability to restructure its debt in an orderly manner and under a court-supervised process as it now can do in terms of the 2016 Promesa Act.

It would seem to be no exaggeration to say that the Puerto Rican economy now finds itself close to the point of no return, for which reason it has to be hoped that the Puerto Rican government does not waste time and political capital on issues that might shift the focus from the urgent need to build consensus for a comprehensive economic reconstruction program.