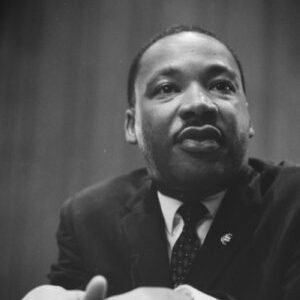 (source: Library of Congress)
[IS] Opinions

Editor’s Note: As America observes the Martin Luther King, Jr. holiday, many recall one of his most famous — and frequently-debated — statements:  “I have a dream that my four little children will one day live in a nation where they will not be judged by the color of their skin but by the content of their character.”  This article offers a view of those words nearly 60 years later.

For another viewpoint, see Counterpoint:The DisContent of One’s Character

Imagine two children on a playground.

These kids play. They laugh. They are helping each other on the slides and sharing a sandwich for lunch. At 4 years old, these children — one Black and one White — see each other as they see themselves. They see not color, or racism, or social stigma. They see another kid who will help them throw their leftover bread to the ducks.

What happens to these two children later in life that creates a racial barrier between them? Adults, and their lies.

Race is a purely sociological construct, one that is taught. Race has been used as an instrument across cultures and times to create privileged groups and outside groups. Privileged groups have then used it to control, manipulate and maintain power over other groups.

Fortunately, most Americans have evolved beyond such artificial structures. Race in America was a historical reality, but it is not an indicator of our future.

Most Americans have moved beyond labels of class and status such as White or Black, rich or poor, Christian or non-Christian. These old, divisive tactics simply aren’t working, and this infuriates the political left because it is dependent upon them for its survival.

When the Rev. Dr. Martin Luther King Jr. cast the glorious vision that man should be judged by “the content of his character,” he foresaw a natural end to these divisive artificial labels. King also recognized that Americans had the strength to excise these things out of the social programming of our kids and that the progress of the human race would naturally bring everyone to the table.

But there are those who benefit from the chaos and would do anything to avoid such an end. Racial animosity has become an industry for some. It is an institution with profiteers at the top of it. Have you seen the glorious houses of the Black Lives Matter leaders?

Race was business when the Ku Klux Klan was formed to suppress the Black vote in the 1800s. It was a business during slavery. The difference today is who runs this business. Jesse Jackson and Al Sharpton have earned millions of dollars extorting companies with their campaigns of racial intimidation. Have they solved any problems, or have they just turned a profit?

The political left and its Marxist allies are not only raking in millions of dollars from the modern race industry but they are using these resources to further divide our society and to perpetuate the conditions that allow them to continue to profit.

Poor Whites and poor Blacks alike suffer from substandard schools, lower prospects, and depressing statistics. Does the color of their skin matter? Of course not. But many liberal politicians ignore the White ones, believing that they’re inherently racist and probably deserve it. Those leaders instead cater to Black masses who like the privilege assigned to victimhood. What a magnificent way to profit!

Therefore, those preschoolers on the playground must become accustomed to a new dynamic. The White one must apologize for being racist, and the Black one must understand that he’s a victim who needs a White liberal program to save him. They can no longer feed the ducks together because the Black child needs to sit in a “safe space” with other Black children so he’s not made to feel uncomfortable by someone who looks a little different.

And so the historic cycle of class and race and profit — so close to extinction — is being perpetuated for another generation.

Shame on the racial profiteers who sully King’s legacy, his holiday, and his dream by claiming to be his heirs.

Richard Holt is a member of the Project 21 black leadership network. He wrote this for InsideSources.com.