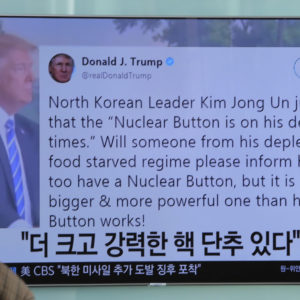 Point: Could You Retweet This, Mr. President?

Kanye West, Jeff Bezos, Robert Mueller and Stephen Curry. What do these four people have in common? They’ve all been the subject of tweets from Donald Trump.

Since taking office, President Trump has tweeted more than 3,500 times, ranging from issues that one could expect the president to tweet about, like immigration and health care, to more random topics like Meryl Streep’s acting career and the NFL.

But many of those tweets are distortions of the truth or even outright lies. He regularly lies both on and off Twitter about matters ranging from the size of the crowd at his inauguration to his regular denials that Russia interfered in the 2016 presidential race in support of his presidential bid.

We get so little transparency from this White House, so to some degree, seeing what Trump tweets could be helpful to understand what might be on his mind at any given time. Tweeting is a way that the president can disseminate his views directly without a filter. But when it is just another platform for lies, it is incredibly damaging to our democracy.

Beyond the steady stream of lies, Trump’s tweets create a host of problems and dangers both domestically and abroad. Is official U.S. foreign and domestic policy coming from Trump’s Twitter account, or are his tweets just stream-of-consciousness reactions related to whatever he’s watching on television at that moment? Many world leaders, elected officials and journalists are continually trying to decipher his words and intentions, which often contradict each other.

His Twitter rants often attempt to inject fear and further divide our already polarized country. He’s used it to attack those who would hold him accountable, from Special Counsel Mueller to journalists asking tough questions. This dangerous and undemocratic rhetoric is not presidential, even if it’s emanating from the man who occupies the Oval Office.

Trump uses Twitter to attack, and in some cases appears to condone his supporters’ threats against anyone who disagrees with or criticizes him, including immigrants, racial and ethnic minorities, reporters, judges and elected officials. He does it to our world allies and adversaries alike. Here is a recent Twitter “war” Trump had with Iranian president Hassan Rouhani:

“To Iranian President Rouhani: NEVER, EVER THREATEN THE UNITED STATES AGAIN OR YOU WILL SUFFER CONSEQUENCES THE LIKES OF WHICH FEW THROUGHOUT HISTORY HAVE EVER SUFFERED BEFORE. WE ARE NO LONGER A COUNTRY THAT WILL STAND FOR YOUR DEMENTED WORDS OF VIOLENCE & DEATH. BE CAUTIOUS!”

Threatening world leaders by sending public, 280-character missives, as he also did to North Korean dictator Kim Jong-un earlier this year, isn’t leadership. Just like his decision-making process would probably benefit from more deliberation and analysis, Trump should proceed with caution on Twitter or else he might accidentally start a real war instead of just a Twitter war.

So Mr. President, please put down your phone and start listening more.

Listen to the thousands of refugees and immigrants who came to the United States seeking a better life and are awaiting to be reunited with their families.

Listen to the voices of ordinary Americans who have pre-existing conditions and need access to health care, instead of listening to the donor class at Mar-a-Lago.

Listen to the American intelligence community that unanimously agreed that Russia attacked our elections in 2016 and is trying to do so again.

Listen to people who disagree with you and don’t dismiss them as “fake news.”

Our capacity to solve problems would likely improve if elected officials — especially President Trump — spent less time on social media and more time listening to people with whom they disagree.