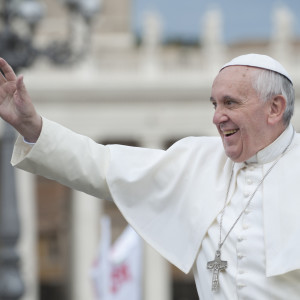 Catholic Republican voters have a more negative view of Pope Francis than Democratic voters in their faith, but the pontiff’s words on climate change still have the ability to sway these conservatives.

Those are two big takeaways from a new national poll of Catholic voters released Wednesday by Catholic University and the group Faith in Public Life, which describes itself as “a strategy center for the faith community advancing faith in the public square as a powerful force for justice, compassion and the common good.”

Still, Francis’ effect on conservatives is complicated. Catholic Republican voters who read Francis’ writing on climate change “were more likely to agree that human activities are responsible” for the environmental phenomenon, and to believe that “humans have a moral duty to protect the environment.”

“This evidence indicates that the pope’s leadership on climate change is likely to be most effective among segments of the population more generally skeptical of climate change,” the poll found.

But Catholic Republican voters aren’t receptive to Francis on every issue. At a Wednesday morning National Press Club event unveiling the poll, speakers said these voters had a notably negative reaction to the pope’s economic views, which isn’t surprising. John Gehring, who directs Catholic programs for Faith in Public Life, said that the pontiff has made quite a radical critique of market capitalism.

“That’s a pretty tough message to swallow for a lot of Americans,” Gehring said. “It’s particularly difficult for a conservative ideology.”

Partisan divisions notwithstanding, Wednesday’s poll made clear that the pope is immensely popular with every group surveyed. More than eighty percent of Catholic voters had a favorable opinion of Francis, and 70 percent of Catholic Republican voters saying he had the church “on the right track.”

Wednesday’s survey also had significant results related to Latino Catholic voters. These voters are much more liberal than non-Latino white Catholics on questions of income inequality and the size of government. They have a special affinity for Francis, the first pope from South America. That’s particularly noteworthy given that Latinos are seen as the future of the church — and the future of American politics.

“He does want to impact political debates,” Gehring said of the pope. “At a time when Donald Trump drags our political discourse into the mud, Pope Francis reminds us the politics should be about substance, not spectacle — empathy, not ego.”

Bloomberg Politics reporter Melinda Henneberger said the pope is a figure above politics, but she also quipped, “Any candidate in the world would love to have these approval numbers.”

Wednesday’s poll came as Francis prepares to make his first trip to the United States next week, and become the first pontiff in history to address a joint session of Congress. He plans to be in Washington, D.C., Sept. 22-24, during which time he’ll meet with President Obama at the White House, lead multiple religious services, and visit Catholic charities in the District. He’ll then spend a few days visiting New York City and Philadelphia before retuning to Rome Sept. 27.