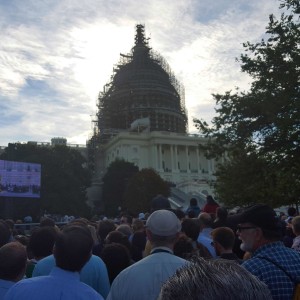 In his historic speech to Congress Thursday, Pope Francis expressed concern for the institution of the family, which he described as “threatened, perhaps as never before, from within and without.”

“Fundamental relationships are being called into question, as is the very basis of marriage and the family,” Francis said. “I can only reiterate the importance and, above all, the richness and the beauty of family life.”

Although the pope’s comments were vague, they were “almost certainly an allusion to same-sex marriage,” as Mark Joseph Stern wrote for Slate. The remarks reminded Stern that, regardless of Francis’ liberal views on economics, environmentalism, and other issues, the pope “doesn’t really support civil unions or same-sex adoption, and he definitely opposes same-sex marriage.” In other words, he’s still a cultural Catholic.

No doubt Francis believes marriage is a union of one man and one woman. [But] not saying so explicitly, I believe, is in keeping with the “Who am I to judge?” openness on homosexuality that made him a star with Catholics and non-Catholics alike. And by not rigidly defining family, but focusing on “the richness and the beauty of family life,” the pope made it possible for same-sex families to see themselves and their faith as one rather than two distinct entities in conflict.

Capehart’s take is particularly thought-provoking in the context of this month’s Pew Research Center polling on U.S. Catholics’ openness to non-traditional families:

For example, 84% of Catholics say it is acceptable for unmarried parents who live together to bring up children, including 48% who call this as good as any other arrangement for raising children. And fully two-thirds of American Catholics think it is acceptable for same-sex couples to raise children, including 43% who say a gay or lesbian couple with children is just as good as any other kind of family.

Catholics also disagree with church teachings on premarital cohabitation and couples raising children out of wedlock. A man and a woman living together as a couple without being married is acceptable to 85 percent of Catholics, and 84 percent believe it’s permissible for unmarried parents who live together to raise children. Meanwhile, only 44 percent of Catholics believe homosexuality is sinful, and almost as many, 39 percent, believe it isn’t.

Pope Francis said Thursday that family issues would be a reoccurring theme of his first-ever visit to the United States, which began in Washington, D.C.,Tuesday, took him to New York Thursday, and will end in Philadelphia this weekend at the World Meeting of Families. Held every three years, the event bills itself as “the world’s largest Catholic gathering of families.”