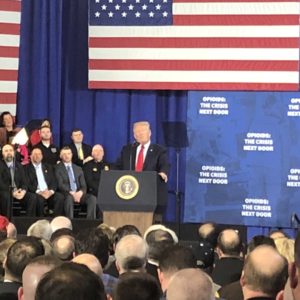 Based on the enthusiastic response to President Donald Trump’s speech in New Hampshire, the era of small government is over. The crowd at Manchester Community College on Monday was in no mood for “Live Free Or Die” politics. Speaking to an invitation-only audience, President Trump pledged to use federal money, federal programs, and–the biggest “big government” idea of all—the federal death penalty to fight the opioid crisis that’s had such a devastating impact on New Hampshire.

It wasn’t exactly a speech Ayn Rand would love. Democrats, on the other hand, found a rare opportunity to praise the president:

“I support many of the policies that the President put forward,” Sen. Jeanne Shaheen (D-NH) said in a statement, while urging the president to “provide the resources necessary to win this fight” (aka “more spending”). “President Trump must lead a national effort. If he does that, there will be broad bipartisan support. ”

Both Shaheen and Sen. Maggie Hassan praised the Trump administration’s $6 billion in new spending over the next two years to address opioid addiction, but that’s hardly a surprise. They’re Democrats, who tend to support government spending and intervention. But what about New Hampshire’s flinty, fiscally-conservative Republicans?

When asked about the irony of listening to a Republican president proposing new government spending and programs to a Republican audience in New Hampshire, Belknap County GOP chairman Alan Glassman told the NH Journal, “I know. I was thinking the same thing.”

But, Glassman said, “We’re at a point where something has to be done. The opioid problem is tearing apart our society. This is the right move, and this is when Republicans and Democrats should work together to get the job done.”

Other Republicans in attendance agreed.

“He’s cutting through the [expletive] and getting the job done,” Rep. Al Baldasaro (R-Londonderry) told the NH Journal, “and he’s absolutely right about the death penalty. We need it!.”

Baldasaro dismissed concerns from the libertarian end of the NH GOP about Trump’s big-government approach and pledged “to do everything I can” to block efforts in the NH legislature to repeal the state’s death penalty. A bill to repeal capital punishment and replace it with a sentence of life without parole passed the upper chamber 14-10 last week. Gov. Chris Sununu (R) has already pledged a veto.

The Trump-friendly audience cheered the president’s get-tough rhetoric both on the death penalty and sanctuary cities. Trump pointedly criticized Massachusetts—always a winning move in New Hampshire—for its anti-immigration-enforcement stance and singled out the city of Lawrence, MA.

“Lawrence is one of the primary sources of fentanyl in six New Hampshire counties,” Trump said, linking the issue to Lawrence’s stance on immigration enforcement.

“Every day, sanctuary cities release illegal immigrants, drug dealers, traffickers, gang members, into our cities,” Trump continued. “They’re protected by these cities, and you say, ‘What are they doing?’ They’re safe havens for just some terrible people, and they’re making it very dangerous for our law enforcement officers.”

This is classic big-government Republicanism, which makes it all the more fascinating in the home of the libertarian “Free State” movement, which encouraged small-government, Sen.-Rand-Paul style Republicans to move to the Granite State have an impact on local politics.

If there’s been an impact, it was not in evidence on Monday.

Which raises a question: If Trump owns the pro-government-action territory in a GOP primary, and if he can bring the traditionally-anti-government “talk-radio” base along with him—how does an anti-Trump Republican like Sen. Jeff Flake (AZ) run against him in 2020?

Trump’s numbers among New Hampshire voters remain soft, and Granite State Republicans have told pollsters they’re open to another alternative—in theory. But Republican office-holders and activists in the audience Monday said they’re not hearing anything other than praise for the president.
So what about that standing ovation Sen. Flake got at the “Politics and Eggs” event at St. Anselm on Friday?

“They gave me a standing ovation,” Lewandowski told the NH Journal. “Trump is going to do just fine.”