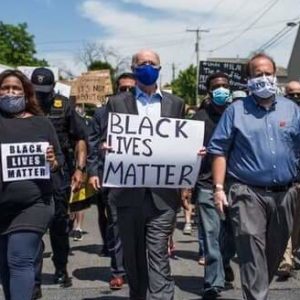 In New Hampshire, Republican Gov. Chris Sununu says his executive order banning gatherings of 10 people or more is still in place. He also simultaneously — and very publicly — encourages the Black Lives Matter protests in his state, with thousands crowded together on public streets.

In Pennsylvania, with one of the harshest lockdowns in the country, Democrat Gov. Tom Wolf has demanded strict adherence to his stay-at-home edicts, which still ban restaurant dining or groups of 25 or more. But last Wednesday, he joined arm-in-arm with hundreds of protesters on the streets of Harrisburg, in apparent defiance of his own order.

These two governors are hardly alone. Gov. Andrew Cuomo, whose state has been hit harder by the horrors of the coronavirus than any other, also went out of his way to praise Black Lives Matter protests — despite both the massive crowds of people in close quarters and the destructive violence that followed some of the protests in New York City.

The risk is so great, Cuomo says, people who attend the rallies should get tested. “I would act as if you were exposed, and I would tell people you interacted with, ‘Assume I’m exposed to the virus,’ ” Cuomo said of the protesters. “If you were at a protest… act responsibly, get a test.”

The tidal wave of political two-stepping — decrying a family trip to the beach as potentially fatal, then urging families to flood into the streets for political protests — is feeding public cynicism about the true danger of the coronavirus. It’s also raising questions about whether the severe stay-at-home strategy, which put millions out of work and cost the nation an estimated $500 billion in GDP per month, was necessary.

Even more problematic, some social observers say, is the damage this is doing to public trust in government health experts.

As Jeffrey Flier, the former dean of Harvard Medical School, told Politico: “At least for me, the sudden change in views of the danger of mass gatherings has been disorienting, and I suspect it has been for many Americans.”

And what will those Americans do if there’s another surge in COVID-19 cases this fall or winter and the same health professionals who told them it was OK to protest suddenly announce they have to go back into lockdown?

Many observers believe Americans will simply refuse to comply.

As author and social commentator J.D. Vance puts it: “In a country of 330 million people, many will have their own causes for violating guidelines. And you can’t just tell them, ‘well, you have to follow the rules because your ‘worthy’ causes are stupid and bad.”

If that trend continues — but public trust in public health policy is so eroded that it undermines future efforts to turn back another severe outbreak of the coronavirus — the tragic and unintended consequence of the protest hypocrisy could be that communities of color will suffer yet again.