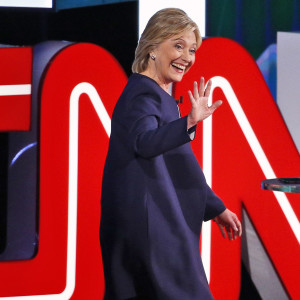 Progressives: “The Center of Gravity in the Democratic Party Has Really Shifted.”

When Adam Green showed up on C-SPAN Wednesday, he was there to take a victory lap.

The Progressive Change Campaign co-founder’s main takeaway from Tuesday’s Democratic presidential debate wasn’t that former Secretary of State Hillary Clinton had prevailed. It wasn’t that Vermont Sen. Bernie Sanders seemed strong. Rather, it was that liberalism, and specifically the populist variety championed by Democratic Sen. Elizabeth Warren of Massachusetts, had carried the day.

“The center of gravity in the Democratic Party has really shifted in the past few years in an economic populist direction, towards the Warren Wing of American politics,” Green said. He noted that Tuesday’s debate was the first in history to include discussion of debt-free college, expanding social security benefits and even jailing Wall Street bankers. Warren may not be running for president, but Green sees the leading Democrats “marching towards the north star” that is her worldview.

“It’s very clear that the debate stage last night was influenced by Elizabeth Warren’s presence in the national dialogue,” he said.

Throughout Wednesday, other noted progressive voices declared the debate a victory for their ideology as well as their preferred candidates. It was further evidence, as Green said explicitly, that the days of President Bill Clinton’s centrist “New Democrats” — the kind of Democrats once associated with the now-defunct Democratic Leadership Council — are over.

“Now, that was a debate,” cheered Joan Walsh, who recently left Salon to be the Nation’s national affairs correspondent. “Courtesy of a Democratic Party that’s shifted left thanks to its base, for the first time in American history a national television audience was exposed to a serious discussion about capitalism vs. socialism.”

At Slate, Michelle Goldberg credited Sanders, a self-described socialist, with setting the terms of the debate and facilitating discussion of socialism “that was completely without red-baiting.”

“The remarkable thing about this exchange is that capitalism itself, rather than the quixotic senator from Vermont, was on the defensive,” Goldberg wrote. “It demonstrated that, whatever else happens, Sanders has already accomplished something profound for American progressives.”

“You’ve got a stage filled with people who are seriously qualified to run for the Socialist or Communist Party,” Gray said. “They absolutely could be running for that nomination.”

Gray acknowledged that one of the lower-tier candidates on the stage, former Virginia Sen. Jim Webb, was a centrist, but said, “He’s got no place anymore! … He’s an actual Democrat like you knew them 40 years ago.”

Wednesday also brought more discussion of whether Vice President Joe Biden will make a late entry into the White House race. Green said progressives have great affection for Biden, but there isn’t currently a rationale for his candidacy. Green also seemed troubled by the vice president’s recent declaration that he is not a populist.

“We are living in a populist era,” Green said. “He better be a populist if he runs.”