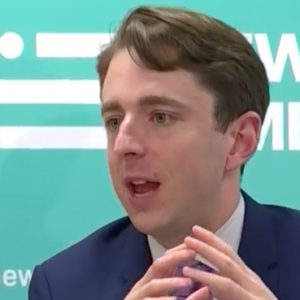 The following interview with Berin Szoka, president of TechFreedom, is part of an ongoing series of Q&As with leading policy professionals in Washington, D.C. This interview is edited for brevity and clarity.

InsideSources: What inspired you to found TechFreedom?

Berin Szoka: I started TechFreedom because the Progress and Freedom Foundation (PFF) closed during the financial downturn. One, I wanted to continue the work PFF had been doing, and do the things PFF wasn’t but should have been doing, like civil liberties and surveillance work. The reason I went to PFF in the first place is because I wanted to be a principled voice in debates over how to govern the future of technology.

I don’t think the perspective we take [at TechFreedom] was or is well-represented. I think there are existing organizations that have a very strong ideological agenda. There are people that start from strong ideological premises on both sides of the debate, and that’s just not really what we do.

We’re really first and foremost lawyers who try to think through these hard problems and provide good analysis. We have our own philosophical approach, but that’s really secondary, and my chief frustration with dealing with the people in our field across the political spectrum is there aren’t that many people who are honest analysts and thinkers first — and advocates for a political view second. We’re not activists, we’re not an advocacy shop, we’re really a public interest law firm.

InsideSources: Tell me about some of the biggest policy issues TechFreedom is focused on right now.

Berin Szoka: As with everything we do, we ask, is this something people are looking at? Section 230 gets a lot of attention, but very few people take the time to lawyer through. A lot of people defending 230 speak in platitudes about how 230 made the internet possible. That’s not what we do. What would be the practical effect of a reasonableness expectation for immunity [like Sen. Josh Hawley’s (R-Mo.) bill]? The practical effect would be you as a website operator would no longer be able to get rid of lawsuits, and after all that hassle and expense, you could perhaps get the lawsuit dismissed. What could be done to open the door into that avalanche of lawsuits? There are very few people in the policy world engaged in that analysis.

The only way we’re going to safeguard against future abuses of power is to have a combination of statutory protections, transparency, and tools that allow people to blow the whistle, whatever the right thing for the circumstance. For example, I am profoundly concerned about the way the administration appears to have weaponized the enforcement of antitrust laws. It appears to me they are operating to suit the political agenda of the White House. It’s pretty clear Trump is trying to use antitrust laws against political rivals.

Our general theme IS about not giving too much discretion to regulators. There are some very specific changes we would like to see made. The president’s war powers under the Communications Act is essentially an internet kill switch. They are very broad, there are essentially no safeguards, and if you’re really concerned about someone abusing power in secret and potentially shutting down communications, those are the sorts of things that should be addressed now. So we are reaching out to people across the political spectrum to be engaged. I don’t think that gets enough attention, and it’s very different from what most people in this field do. People are focused on short-term partisan fights.

The next administration will have an opportunity to start implementing these kinds of reforms for all sorts of things, like how we appoint commissioners over agencies, that process is breaking down. We would really like to sit down with people and fix these problems with the regulatory state. They will really have an opportunity to step back from the normal partisan fights and institute safeguards.

InsideSources: What do you think are some of the biggest misconceptions surrounding some of these issues?

Berin Szoka: Most people think that the debate over the last few years has been about net neutrality, when really it’s been about the FCC’s authority over internet services. The only way we’re going to resolve this issue is to distinguish those two things. Democrats still say Mike Doyle’s bill will resolve this fight, well no it won’t, it restores the FCC’s open internet order. It restores the FCC’s authority over internet services, and that’s something we’ve always objected to, not the net neutrality principles.

The really big misunderstanding that underlies that whole debate is that people on both sides of the aisle, especially Republicans, is that they really don’t understand the problem of scale. The reason Section 230 is so vital is because it’s one thing for a newspaper to filter all the letters to the editor and third-party op-eds, but any website, not just Google and Facebook, there’s no way you or I could manage all the comments. The problem just grows from there.

When Republicans complain about bias and social media content moderation, what they’re really seeing is the result of the vast scale of these services. It’s just not possible to make perfectly thoughtful decisions all the time. We can’t have the courts litigating every single time someone complains about content on the internet. We have to have cruder, faster mechanisms that are imperfect and will result in a lot of absurd cases of content being taken down that shouldn’t be.

The other bigger point I would make that relates to abuse of power: I’m constantly amazed at people who propose something like broad power to a regulator with open discretion and then don’t think about how that power will be abused when they’re not in power.

When we start thinking not from a knee-jerk ideological perspective and start practically thinking things through, how will this power be abused? What will people on the other side do with it?

InsideSources: Which issue are you most passionate about?

Berin Szoka: At the moment, I would say I’m most passionate about defending internet services against Republican hypocrisy.

Last year [when I testified at the April 26, 2018 House Judiciary Committee hearing] I naively expected I would hear some Republican attacks but at least most or some would be willing to say whatever mistakes tech companies might make in content moderation, we don’t think the government should dictate what tech companies should do. But instead every single one of them took the opportunity to rave about Republicans being censored without any anecdotal examples.

InsideSources: What triggered your interest in these tech issues?

Berin Szoka: I’m essentially doing today what I wanted to do as a freshman or sophomore in college. The book “The Future and Its Enemies” by Virginia Postrel I’ve always said has been my lodestar. That’s sort of generally libertarian, but you don’t have to be a libertarian to feel that way about the internet and evolving services. Essentially, [it’s about how] we’re better off not trying to put the future in some neat and tidy box.

Beyond that, the net neutrality debate wasn’t really my choice, that kind of took over the field, and it’s the same for Section 230. Groups like the Media Research Center figured out that net neutrality was a great fundraising issue, and are essentially taking the playbook from Fight for the Future and doing the same thing.

InsideSources: Are there any experiences that stand out in how they influenced your political views and policy positions?

Berin Szoka: The April 26, 2018 hearing was, for me, the last straw. It was at that hearing that I realized the Republican Party is completely lost. If that hearing happened a year before, every single Republican there would have said all the same things about how terrible the Fairness Doctrine was, and now they turn around and push that exact same idea for social media. They’re the ones who have rushed to say for 10 years that net neutrality is the Fairness Doctrine for the internet.

InsideSources: What politicians, economists and other influencers have influenced your views and policy positions?

Berin Szoka: Virginia Postrel and her book, which I really cannot recommend enough. In college I also read The Innovator’s Dilemma by Clayton Christiansen, and its fundamental point is still quite right, that the really important thing about innovation is that Facebook isn’t going to be disrupted by another Facebook, but by someone who does something completely different that disrupts their business model.

That’s the heart of our work, to make sure regulation doesn’t lock in a way of doing things because that will lock in our current giants and their interests. I also read an early law and economics take on internet regulation, Information Rules by Hal Varian and Carl Shapiro, that’s still a great work. Also Hayek.

InsideSources: Do you have any nerdy, unique hobbies?

Berin Szoka: Well, I row. I row on the Anacostia and have the river to myself and think about things. Language — I’m a pretty good French speaker, and I’m taking German again, but my German is pretty bad. My license plate is BAROQUE, I love baroque music. Bach is my favorite.