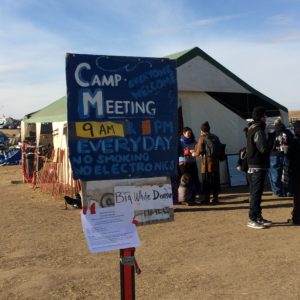 The Dakota Access Pipeline protests may have begun this summer as a small gathering of members of the Standing Rock Sioux tribe, but they have grown. Now, the protests have become a movement with ties to environmental protests around the country and allies around the world. Recent signs show that as the protests have grown, the Native American elements are increasingly diluted, leading to fractures between the camp and the Standing Rock tribe itself.

Standing Rock chairman Dave Archambault II tacitly acknowledged this at a tribal council meeting on Thursday. The meeting discussed moving the encampments away from areas beside the river that are likely to flood when the snowmelt begins.

“What I was hoping is that we can sit down with whoever the camp leaders are and say, if we want to protect this water, we need to make sure that anything in the floodplain is off,” Archambault said.

While Archambault himself has appeared before the United Nations and written op-ed pieces speaking about the protest movement, it is clear that he does not see himself as the leader of the camps. It remains unclear who that person might be.

At the meeting, Archambault also voiced concern over the poaching of fish and game by protesters.

“Poaching is taking place here, from the camp. There are pictures from it. I saw a video of a deer swimming in circles and then getting stabbed at the camp at the Cannonball River,” he said. “I saw another picture of a mule deer buck being skinned by non-Indians.”

The incident Archambault refers to was captured on video and is currently under investigation by the North Dakota Department of Game and Fish.

According to reports on DecoyPro.com, poaching is not only illegal, it interferes with the tribe’s wildlife management programs. Each year, the Standing Rock tribe issues a limited number of hunting tags, or permits, to Indians and non-Indians. The revenue from the sale of the tags helps fund wildlife management programs and the limited number of tags helps the tribe prevent overhunting.

The meeting was only the latest example of the increasingly strained relationship between the tribe and the camps. In early December, Archambault thanked the protesters for their help and asked them to leave the camps and return home. Some left, but many still remain.

As the protest movement has spread, shifting from #NoDAPL and #StandWithStandingRock to #StopTheBlackSnake, its connection to native rights has grown weaker and native voices no longer are the sole driving figures of the campaign. Neither of the two people who rappelled down from the rafters of the US Bank Stadium during a recent Vikings game were Native American. On Thursday, actor Jeff Bridges accepted a National Board of Review award for best supporting actor on behalf of the protesters and used his speech to thank the protesters for “looking out not only for their own interests, but for all of our interests, making sure we live on a healthy planet.”

Signs of the shift from a tribally-driven to tribally-inclusive protest were visible even this fall, when the Oceti Sakowin camp began requiring new arrivals to attend morning orientations and daily camp meetings. The orientations became necessary when outside volunteers began to outnumber tribal members. Increasingly, orientation served to teach non-native protesters how to avoid inadvertently interfering with traditional ceremonies and worship practices.

However, the broader publicity of the movement points to the trend continuing, which could make it more difficult for the tribe to encourage protesters to leave if they reach an agreement with the pipeline company.