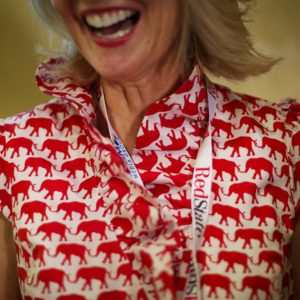 Ginger Howard, of Atlanta, wears a dress decorated with the elephant symbol of the Republican party, as she sells similar dresses to attendees in between speakers at the RedState Gathering Saturday, Aug. 8, 2015, in Atlanta. (AP Photo/David Goldman)
News

More conservatives in media and on Capitol Hill are quietly voicing opposition to the $3.9 billion Sinclair-Tribune merger, according to right-leaning political blog RedState.

The “political news blog for right of center activists” reports “influential conservatives inside and outside of Congress are beginning to scrutinize a proposed merger” between Sinclair Broadcast Group, the nation’s largest TV broadcaster also known for its right-leaning political news bias, and Tribune Media, the second largest.

If the transaction is approved by the Justice Department and the Federal Communications Commission, Sinclair will control more than 200 stations, including over 130 affiliated with the four biggest broadcast networks in the U.S.: ABC, CBS, NBC and Fox. The stations stretch across more than 100 markets, including 40 of the top 50 in places like New York, Los Angeles, and Chicago, and political battleground states such as North Carolina, Ohio, and Pennsylvania.

That would let Sinclair reach 87.3 million of the 119.6 million homes that Nielsen estimates have TVs — more than 70 percent of all U.S. households, far exceeding Congress’s national broadcasting cap limiting any one company from reaching more than 39 percent of the national audience.

While Republicans appointed by President Donald Trump, like FCC Chairman Ajit Pai, have paved the way for the merger by enacting loopholes and lifting regulations, “Tea Party senators elected in the 2010 and 2012 cycles and senators from some Great Plains States are proving more skeptical of the deal,” and “at least one highly-influential, leading conservative legal and political mind outside of Congress is now pushing senators to oppose the merger,” according to RedState.

Their opposition stems chiefly from concerns about Sinclair’s history of gutting local news stations, its post-merger potential to raise prices for content transmitted over cable and satellite providers, and the outsized share of the market for conservative news it could acquire.

“For years, broadcasters have argued for special regulatory treatment based on their role in providing heavily localized news,” it reads. “The argument goes that Sinclair may be trying to claim the upside of that treatment while dispensing with the content that entitles them to it, thereby having its cake and eating it, too.”

Cable trade groups and satellite provider Dish Network warned the FCC the merger will let Sinclair raise prices to retransmit its content, and that those increased costs will ultimately be passed on to consumers.

“[C]onservatives are concerned that post-merger, Sinclair could use its market position and vastly expanded insider knowledge of what deals cable and satellite companies will and will not cut, to argue for higher retransmission fees . . . a potential anti-trust problem,” RedState reports.

Fellow conservative news outlets The Blaze, Newsmax, and One America News Network are concerned the deal will give Sinclair an unfair advantage in the conservative news space. The combined Sinclair-Tribune audience would reach 2.2 million American households, more than prime time cable Fox News programs like “The Five” and “Tucker Carlson Tonight.”

“[C]onservatives are hearing from upstart right-of-center media companies who claim the Sinclair merger would damage their ability to build market share and a customer base, and thereby harm the prospects for conservative media building a toehold in the overall left-leaning U.S. media sphere,” the blog says.

Those outlets say they already face a bias on popular digital destinations for news like Facebook and Google, and told RedState “pitting them against an even-bigger broadcasting giant could be a death blow.”

Sinclair argues allowing broadcasters to merge is the only way they can compete with online streaming platforms like Netflix, that its resources will supplement local newsrooms with nationally generated content, and that critics of the media conglomerate’s political content run afoul of the First Amendment.

The FCC said in September it wants more information from Sinclair for its review of the merger, like how the combined companies plan to deal with TV ownership restrictions (since it would still exceed the audience cap by more than 6 percent even after a recent FCC-revived loophole known as the UHF discount is applied) and rules limiting how many top stations any one broadcaster can own in a single market. The transaction is also being reviewed by the Department of Justice.