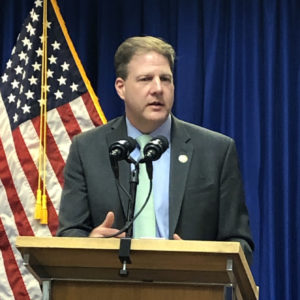 Gov. Chris Sununu is America’s most fiscally responsible governor, according to the latest rankings from the Cato Institute, a small-government think tank that advocates limited government and lower taxes.

“Runaway government spending is the economic issue of our time — and, in fact, the moral issue of our time due to the looming impact on future generations,” said Cato CEO Peter Goettler in a statement. “We’re thankful that some leaders, like Governor Sununu, continue to take fiscal rectitude seriously. We applaud his aspiration for New Hampshire ‘to be everything Washington isn’t.'”

The Cato Institute analysis grades governors on their fiscal policies from a limited-government perspective.

Sununu’s boost to the top of the list is an improvement over the “B” grade he received in the previous Cato analysis.

“It is an honor to receive the Cato Institute’s top grade this year,” Sununu said. “Through hard work, fiscal responsibility, and smart decisions, New Hampshire is an economic powerhouse. Our pro-growth, pro-jobs agenda is working for New Hampshire families — and we’re just getting started.”

Sununu participated in an online discussion of fiscal policy Monday (see below) and talked about the competitive advantage New Hampshire enjoys. “It’s great that our tax burden is lower than Massachusetts and New York and Connecticut and Vermont,” Sununu said, “but let’s be honest: That ain’t hard.”

“Governor Sununu has defended New Hampshire’s status as a low‐​tax state and kept general funding spending close to flat in recent years. While neighboring Massachusetts imposed a costly payroll tax to fund a new paid leave program, Sununu has vetoed such a plan in his state. Sununu has cut business tax rates to improve New Hampshire’s competitiveness and defended the cuts from legislative efforts to undo them,” the Cato report says.

Sununu has made his opposition to higher taxes — particularly the payroll-tax-funded paid family medical leave proposal from his Democratic opponent state Sen. Dan Feltes — a central part of his campaign. Polls show the incumbent Republican enjoys a solid lead over Feltes one month before Election Day.

“New Hampshire is a small state, but it is an important symbol of good government and sound fiscal management,” said Cato Director of Tax Policy Studies Chris Edwards. “Other states should look to the New Hampshire model and to Governor Sununu’s fiscal leadership.”