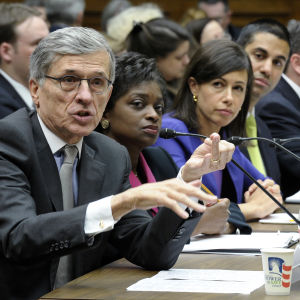 Federal Communications Commissioners Tom Wheeler and Ajit Pai, frequently at odds for the last year over the FCC’s year-old net neutrality regulations, had one of their most heated exchanges yet before a congressional hearing Wednesday, where the two sparred over the rules’ impact on broadband investment.

“I think what we’ve seen in 2015 is the fact that among both major wireline broadband providers and small providers that investment and innovation is slowing,” Pai told the Senate Commerce, Science and Transportation Committee alongside all four of his fellow commissioners Wednesday.

Pai said small wireless Internet service providers have testified before Congress on having to abandon plans for expansion because of uncertainty surrounding the rules and the possible legal expense of ensuring compliance.

“Among major providers, we have seen the first ever decline in broadband wireline investment in the Internet age outside of the tech bubble bursting in 2001, and the great recession in 2008,” Pai continued. “Now I think it’s telling that some of these major companies are spending billions of dollars on companies like AOL, or even putting their investments abroad. And that’s because, presumably, they think the return on the investment is now greater in areas outside of the broadband infrastructure.”

Since before Wheeler introduced the Open Internet Order reclassifying ISPs as common carrier public utility services — the same designation shared by telephone providers — Pai and others in government and the industry warned such a move by the FCC would create market uncertainty and slow network investment, innovation and growth.

“With all due respect to my colleague, what he has just portrayed as facts are not,” Wheeler countered. “Investment is up, and I can quote you from the statements that the companies themselves make when they are reporting to Wall Street, I have it here: fiber is up 13 percent over last year, usage of the Internet is up and that has driven what you want to be up, which is increased revenue per subscriber for the Internet companies in the last year since the Open Internet Order took place.”

During the agency oversight hearing Republicans on the committee asserted that had the FCC provided more notice to the public on the areas its lawyers found legally questionable during the rulemaking process — of which Pai said there were nine major examples — public response would have squashed Wheeler’s reclassification.

The same Republicans released a report Tuesday examining correspondence between the White House and the FCC during the rulemaking process, some of which were not documented in FCC filings. The report concludes the Obama administration improperly influenced the FCC’s eventual net neutrality ruling.

Wheeler testified it’s not historically unheard of for a president to call on an FCC commissioner, and added the agency announced publicly it “pushed pause” during the rulemaking process to address the areas of concern.

“It’s telling on one hand to say all this investment is up and infrastructure is booming, yet on the other hand just one month ago, the chairman and the majority of the commission said broadband is not being reasonably and timely deployed according to Section 706,” Pai responded. “Well which is it? Is broadband infrastructure broken or is it not?”

During it’s January open meeting the commission voted to approve the 2016 Broadband Progress Report, which found more than 30 million Americans lack access to acceptable Internet speeds, and concluded “advanced telecommunications capability is not being deployed in a reasonable and timely fashion to all Americans.”

“And I would submit to you that part of the reason why it’s not — I agreed with the chairman and my colleagues — that broadband is not being reasonably deployed in a timely way is precisely because the FCC’s policies have failed,” Pai said. “This administration’s policies on broadband have failed, and that’s part of the reason we see this decline in broadband infrastructure investment.”

Pai said Google’s greater market capitalization over every other cable company in the U.S. combined is evidence the FCC’s regulations are depressing broadband investment.

“Facts speak for themselves, and I’d be happy to submit sworn declarations of numerous ISPs for the record,” Pai challenged.

“I’ll be happy to submit the information that the companies provide under penalty of SEC to their investors about their investment practices,” Wheeler said.

“It’s striking what CEOs with pending mergers before the FCC will say about the FCC’s top priorities,” Pai quipped, hinting at the pending commission approval of the Time Warner Cable and Charter Communications merger.

“I’m talking about AT&T and Comcast and companies like that,” Wheeler said.

“Who are typically repeat players before an agency who regulates them highly,” Pai said.

Economists on both sides of the aisle have presented various opinions on a decline in broadband investment over the last year, some before Congress itself last fall.