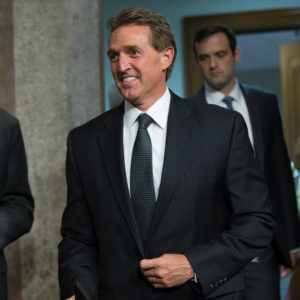 Senate Republicans introduced a measure Tuesday to repeal internet privacy rules passed by the Obama administration’s Federal Communications Commission that make it harder for service providers to collect data for targeted ads from their subscribers.

Arizona Sen. Jeff Flake introduced the measure late Tuesday alongside more than 20 fellow Republicans co-sponsors. The Flake proposal seeks to unwind the rules via the Congressional Review Act, allowing for a simple majority vote in both the House and Senate to repeal the rules and prevent the agency from passing substantially similar regulations in the future.

The internet privacy rules passed in October ban providers like Comcast and Verizon from collecting and monetizing virtually any subscriber information without prior user permission, including browsing history and app usage.

Ajit Pai, the new Republican chairman of the FCC, stayed the rules last week just before they were scheduled to take effect. In a statement with acting Federal Trade Commission Chairwoman Maureen Ohlhausen, both said they want to return privacy enforcement to the FTC. The agency exercised lighter-touch privacy rules over internet providers before the FCC reclassified broadband as a common carrier service subject to FCC jurisdiction in its 2015 net neutrality rules.

Service providers like Comcast and Verizon oppose the rules, which they say limit their ability to market to subscribers. They argue the FCC’s internet privacy rules give a market advantage to edge providers like Google and Facebook, the targeted advertising giants of the web, which are subject to the looser FTC rules broadband providers were previously subject to.

“The rule harms consumers because it creates confusion in a regulatory environment in which customer data is regulated by two different agency standards, based on whether information is used by an internet service provider or edge provider,” USTelecom, CTIA, NCTA, and others wrote to the Senate Commerce, Science and Transportation Committee. The groups together represent Comcast, AT&T, CenturyLink, T-Mobile, Verizon, Charter Communications and others.

“Last month, a leading representative of the technology sector testified before this committee that the rule may set a dangerous precedent for the entire internet ecosystem,” the letter reads. “Consumers enjoy the advertising-supported internet and innovation, and investment thrived before the rule’s adoption.”

Supporters of the CRA justify the move by pointing out broadband providers will still be subject to privacy protections set down in Section 222 of the Communications Act. The provision sets down lighter restrictions on what telephone providers can do with customer proprietary network information.

If passed, the measure would act as the first major blow to net neutrality, rules Republicans in Congress and on the commission say they also intend to revisit. Democrats and pro-net neutrality groups are pushing back against Flake’s proposal.

“Big broadband barons and their Republican allies want to turn the telecommunications marketplace into a Wild West where consumers are held captive with no defense against abusive invasions of their privacy by internet service providers,” Sen. Ed Markey said Tuesday. Markey sits on the committee overseeing the FCC.

“Consumers will have no ability to stop internet service providers from invading their privacy and selling sensitive information about their health, finances, and children to advertisers, insurers, data brokers or others who can profit off of this personal information, all without their affirmative consent,” he added.

Public Knowledge policy fellow Dallas Harris said the CRA “will leave a huge gap in consumer privacy protections with no end in sight, and no future relief from the FCC.”

The resolution comes a day before FCC commissioners are scheduled to testify before the Senate, where commissioners will face tough questions from lawmakers on both sides about the future of net neutrality.