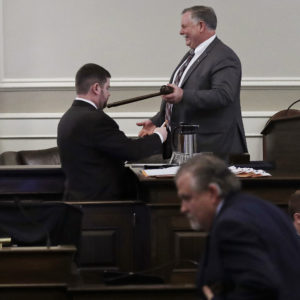 New Hampshire Speaker of the House Shawn Jasper, right, hands the gavel to N.H. Rep. Frank Sapareto, R-Derry, so he could vote from his seat in the chamber at the State House in advance of voting on right to work legislation in Concord, N.H., Thursday, Feb. 16, 2017. House lawmakers have killed the union-targeting legislation after a Republican-on-Republican debate. The outcome marks a defeat for Republican Gov. Chris Sununu, who called right to work a top priority and had urged members of his party to get in line. (AP Photo/Charles Krupa)
News

Why Did Right-to-Work Fail Again in New Hampshire?

Yet again, the House voted Thursday to kill a right-to-work bill. Since the early 1980s, the New Hampshire House has rejected right to work 35 times and despite Republican control of the State House, they still couldn’t get it done this year.

The bill, which would have prevented unions from requiring nonmembers to pay the cost of representing them, failed by a 200-177 vote, with 32 Republicans joining every Democrat to oppose the bill. Fifteen Republicans and four Democrats did not vote. After the bill was voted down, the House brought up a measure, which passed, stating the right-to-work issue could not be brought up again until the next legislative session in 2019.

So why did it fail again? The Democrats argue that right-to-work is union busting, creates a “free rider” problem, and is wrong for the Granite State. If it had passed, New Hampshire would have been the first state in the northeast to have a right-to-work law on the books. However, the politics of the vote reveals confrontational rhetoric, deep wounds within the Republican Party, and the blame game of who’s at fault for letting it fail.

Gov. Chris Sununu made it clear throughout his campaign that he wanted to see right-to-work pass in New Hampshire. He even mentioned it in his inauguration speech in January, saying how the law would be an important economic benefit for the state and would encourage businesses to come here.

Before the vote, the governor said he was not “banging the walls” trying to get House Republicans to vote a certain way. However, behind closed doors, he reportedly told the House Republican caucus on Thursday that “you’re either with us or against us.”

“You’re either a Republican or a Democrat,” and he invited opponents of right-to-work to “go leave and vote with the Democrats.”

High-ranking supporters of the bill also told lawmakers that if they won’t vote in favor of the bill, then figure out a way not to vote against, meaning stay home or abstain.

Rep. Matthew Scruton, R-Rochester, said he was encouraged by his colleagues to stay home because “the roads were slick.”

“I did not listen to that advice,” he told the Fosters Daily Democrat. “This bill was being pushed by several out-of-state special interest groups and was not going to help New Hampshire workers.”

State Republican Party Chairman Jeanie Forrester also displayed some of her strength in her newly elected position at a Wednesday press conference, where she said “for those folks who support the governor,” they will be rewarded in the next election cycle with campaign funds.

Even for outside groups, like the state chapter of Americans for Prosperity, said they wouldn’t support lawmakers who broke their pledge. During each election, the group asks all legislators to sign a five-part pledge, which includes support for right-to-work.

Reps. David Miltz, of Derry, and Rio Tilton, of Seabrook, signed the pledge, but voted against the bill Thursday.

“Have I mentioned that we don’t treat pledge breakers well,” AFP state director Greg Moore told the Union Leader. “If we don’t do something when you break a pledge, the pledge doesn’t mean a whole lot, right?”

This pressure from House leadership, the governor’s office, state party, and outside groups might not have convinced “on-the fence” Republicans who are current or former union members, or know people who are in a union. Rep. Tim Josephson, D-Canaan, said strong-arming the House Republican caucus into voting in favor of something they don’t agree with alienates them.

When you tell your caucus "you're w/us or against us" you alienate those who actually rep THE PEOPLE. #nhpolitics https://t.co/BgpOoaWfpc

For some lawmakers, they are concerned about how their vote might play in their home district come election time next year or if they choose to run for local office.

That happened to House Speaker Shawn Jasper in 2012. He lost an election to serve as Hudson selectman, even though he served on the board for years and was the incumbent chair. He blamed his loss on his support for right to work, which failed by one vote in the House in 2011.

Jasper’s role in the vote is also being questioned by the more zealous right-to-work lawmakers. Some say he didn’t try hard enough to convince people to vote for it and are blaming him for the bill’s failure. Jasper is pushing back saying that’s not true, he supports right-to-work, but it was always going to be a tough sell in the House. Jasper was also endorsed this past election by the SEIU Local 1984, State Employees Association. That endorsement probably didn’t help his cause either.

The speaker barely won his gavel for a second term after defeating a fervent right-to-work supporter in Rep. Laurie Sanborn, R-Bedford. After the December vote, Jasper said he recognized that his party was fractured, but he hoped to move forward and work with all Republicans.

“I think we’d all like to move beyond the issues of the past,” he told reporters at the time. “I’m certainly going to be working with the people who were not in favor of me being re-elected.”

To prove he stood with the governor, Jasper stepped down from the speaker’s podium, went to his seat, and cast a vote in favor of right-to-work. After the vote, he echoed a similar message as he did in December.

“What I’m trying to do, and not everyone appreciates this, is to avoid tearing my caucus apart,” he said.

Despite his sentiments, some Republicans still think his support his disingenuous. Some say he “stacked” the House Labor, Industrial and Rehabilitative Services Committee with anti-right-to-work Republicans.

“There has been an ongoing attempt by a number of Right-to-Work supporters, who facing the possibility that SB 11 will be defeated in the House on Thursday, are attempting to portray me as the reason for such a defeat, alleging that I had ‘stacked’ the Labor Committee,” Jasper said in an email to House Republicans on Wednesday before the vote. “Nothing could be further from the truth.”

At the press conference with Forrester, Jasper pushed back against making right-to-work a “litmus test.”

Jasper was then criticized by former NHGOP Chairman Jennifer Horn on Facebook, saying he sent “a clear and consistent message against this legislation.”

LACK OF UNIFIED CAUCUS OR MESSAGE

Jasper is right in that the New Hampshire Republican Party is fractured and this right-to-work bill further exposed the wounds that have yet to be bandaged. Among the 32 Republicans who voted against the legislation, several of them were from Jasper’s leadership team.

Twenty of the 32 Republicans were from Rockingham County and out of 10 representatives from Derry’s delegation, seven of them opposed it.

The vote also split former allies, including President Donald Trump supporters. Rep. Fred Doucette, R-Salem, a former co-chair of Trump’s campaign and a member of the labor committee, voted against right-to-work. Doucette is also a former union member and said many of his constituents are also union members.

House Democratic Leader Steve Shurtleff told WMUR that the GOP leadership “is trying to paint it as being Democrat versus Republican, but it is bipartisan. I don’t think it plays well to tell Republicans who disagree with this that they will be ostracized by the party going forward. I’ve always told my caucus they are free to vote their consciences.”

It remains to be seen how Jasper and the House leadership plan to unify the Republican caucus, but if another controversial vote comes up, expect to see some divide in the party again.

Rep. Sean Morrison, R-Epping, also voted against the bill and said the right-to-work fight was more of “a matter of message than substance.”“I too believe this is about freedom … freedom of businesses to conduct themselves as they see fit, and freedom from overreach by government in private business matters,” he told the Union Leader. So let’s lower energy costs, lower business taxes, less red tape and less government interference in employee/employer relationships, as we should in the Live Free or Die state.”

Sununu said he was “deeply disappointed” in the result of the vote, but isn’t going to let this failure define his term.

“It is clear that some House members did not understand this opportunity to unleash the untapped potential of our economy,” he said in a statement. “I know that we can continue to work collaboratively on initiatives that will drive new business into the state. Right-to-work, though important, is just one piece of a broader effort to promote economic development, signaling to our nation’s business community that New Hampshire is open for business.”

Expect to see a push on further cutting business taxes in the state. Former state Rep. Joe Sweeney also hopes that becomes a focus of the administration.

#NHHouse should accelerate business tax cuts to appeal for new businesses to move here. Need to make up for #RTW failure. #nhpolitics

There’s also a national right-to-work bill that has been introduced in Congress. If that passes and Trump signs it, New Hampshire will have to comply with it. It has a possibility of making it through, since Republicans hold majorities in the House and Senate, but it’s almost certain that Democrats would filibuster the bill if it reaches the Senate floor.

It’ll also be important to keep an eye on the 32 House Republicans that voted against right-to-work next year if they seek reelection. Will the NHGOP find someone to challenge those representatives in a primary fight? Will they see any funds from the party for reelection?

However, don’t expect right-to-work to be gone for good. If the GOP can hold on to the State House in 2018, it can push the legislation again.

“It’s always been a heavy lift,” Moore told the Union Leader. “This cause can succeed but only if you make it a prolonged message which galvanizes the support for free enterprise that is out there across this state. We’re bowed but not beaten.”