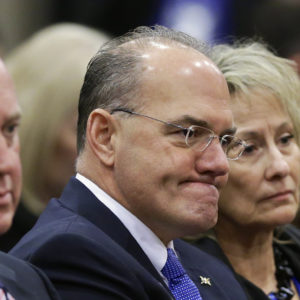 Former Mayor of Cedar Rapids and Former Speaker of the Iowa House of Representatives Ron Corbett had his campaign for the Republican gubernatorial nomination come to a halt this week after he failed to reach the necessary 4,005 nomination signatures required to compete in the primary. He was only eight signatures shy, at 3,997.

The two-hour-long hearing on the matter was just one of nine challenges that the three-panel board heard in regards to the nominating process that concluded two weeks ago. Since the deadline, the 2018 nomination and primary cycle has been headline-grabbing, said Republican strategist Matt Strawn. He couldn’t recall another instance in which both a top DCCC recruited congressional candidate, Theresa Greenfield (Congressional District 3), and a longtime Republican elected official, Ron Corbett, both put themselves in a position to miss the June primary ballot.

Craig Robinson, Republican strategist and founder and editor-in-chief of The Iowa Republican, challenged Corbett’s signatures, which were at 4,091 before the hearing began, stating that there were duplicates and missing information on the signature forms, bringing down the actual total to 3,983. With a defense of attempting to add crossed-out signatures to the total count, Corbett’s camp was able to come up just eight signatures short.

In Greenfield’s case, upon submitting her nomination papers with the appropriate amount of signatures, it was discovered through the media that she did not in fact reach the amount of signatures provided, due to her campaign manager forging signatures to reach the minimum threshold. Subsequently, Greenfield turned in another petition, this time failing to achieve that threshold, and that application was rejected by the Secretary of State’s Office. At a Democratic district convention last weekend however, an affidavit was submitted to have Greenfield put on the ballot. Robinson’s team challenged this decision, as well, on the grounds that Greenfield did not formally withdraw her second petition. The panel ruled that the Secretary of State’s rejection was grounds enough as a withdraw, however, Secretary of State Paul Pate said that he disagreed with the process by which she is attempting to get on the ballot, but couldn’t formally make a decision to deny the actions of the district convention.

Less high-profile challenges occupied most of the day’s affairs. A total of eight challenges were made against Republican candidates. In total, the nine challenges in an election cycle could be considered a high number, especially with eight coming within one party. Kevin Hall, a spokesman for the Secretary of State, did not have an exact total of previous challenges through the nomination process over the last several years, though Strawn said that the challenge strategy makes sense, given that if a nominee challenge should result in a candidate disqualification, then candidates don’t have to spend money on a primary before competing against the other party in the formal election. Avoiding a primary means more money to spend.

University of Iowa Professor Tim Hagle said that nine challenges might be high, but it “might also be that we just weren’t paying close attention in the past.”

“Along these lines it’s no surprise that, for example, the nomination petitions of Governor Reynolds were challenged,” Hagle said. “Having problems with nomination petitions or even failing to meet the requirements can be an embarrassment and can cause the party to scramble to find a way around the problem (such as having to nominate a candidate at a convention). This is a particular problem for an incumbent as it gives the opposing party a talking point regarding the apparent lack of competence of the incumbent.”

The second is when the challenge occurs within the party, which usually happens when there is competition for a nomination, such as Corbett challenging Reynolds to a primary.

“Reynolds would obviously prefer to not have competition in the primary so it’s no surprise that Corbett’s petitions were challenged,” Hagle said. “There were plenty of Republicans who didn’t think Corbett should challenge a sitting Republican governor in a year that could be tough for Republicans even if she hadn’t been elected in her own right before.”

In a situation when there isn’t an incumbent, Hagle said, a challenge is still a way to cut down on the competition if one of the candidates hasn’t gotten the required signatures for the nomination. Hagle said that challenges to nomination petitions aren’t something new.

“It’s possible, however, that in a more polarized political environment we will see candidates or parties (or supporters of either) willing to use such challenges as an additional tactic,” Hagle said. “There are obviously individual aspects of every race, but if there is an overall trend for increased challenges, increased partisanship might be a contributing factor.”