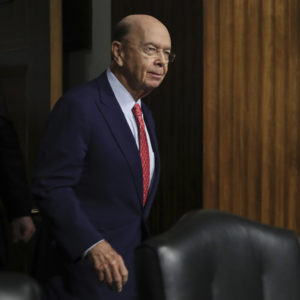 Ross: No Rolling Back Internet Handoff

Ross said there’s “no realistic way” to walk back the transition of U.S. oversight of the internet’s domain name authority to a global stakeholder model since the Commerce Department declined to renew its contract with the Internet Corporation for Assigned Names and Numbers (ICANN) last fall.

“As such a big market and really as the inventors of the internet, I’m a little surprised that we seem to be essentially voiceless in the governance of that activity,” Ross said during his Senate confirmation hearing Wednesday. “That strikes me as an intellectually incorrect solution.”

ICANN is the U.S.-based non-profit that oversees key internet infrastructure functions like assigning internet protocol (IP) addresses, overseeing domain names like .com and .org, and acting as the roadmap guiding devices to websites, all part of the Internet Assigned Numbers Authority (IANA).

The National Telecommunications and Information Administration (NTIA) within Commerce oversaw ICANN until their agreement, in place since the Clinton administration, expired last year as part of the White House’s plan to cede control to the international community. Oversight now falls to a group of private global technology companies, which can hear proposals from a collection of governments including the U.S., Russia, and China.

Republicans including Texas Sen. Ted Cruz tried to block the transition, concerned countries with records of censorship and human rights abuses like Russia and China would have an equal seat at the table with the U.S.

“Do you share those concerns and will you commit to working with this committee to ensure that we protect free speech on the internet and that we do not allow enemies of free speech to exercise authority that restricts our freedoms here in America?” Cruz asked.

Ross agreed, but added there was little the U.S. could do now that the deal is done.

“I’m not aware of what it is we can actually do right now to deal with that,” Ross said. “If some realistic alternative comes up, I’ll be very interested to explore it.”

The billionaire investor addressed a number of technology concerns raised by members of the Senate Commerce, Science and Transportation Committee including pledging to help rural states expand broadband as part of the president-elect’s infrastructure revamp, find ways to free up spectrum held by government, and improve cybersecurity across federal agencies.

Ross said it would be “tricky” to incentivize agencies to give up spectrum they’re not using without action from Congress, but added he would “do his best” in any areas where Commerce can intervene.

On the cyber front, the nominee said future federal information technology procurement would include cloud-based systems for efficiency, cost-effectiveness, and security.

“I’m a very big proponent of cloud,” Ross said. “We’ve used it a lot in the private sector, and as far as we can tell it is not only more efficient, it’s probably also more secure for lots of very complicated technical reasons. I think it’s a very important thing for government to do.”

He added it was equally important for agencies to get on the same systems for better communication, and reduce the amount of information siloing that occurs from the broad range and age of technology used across the federal government.

“I think much more could be done,” he added.