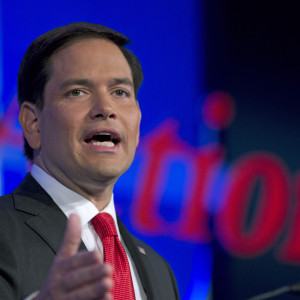 But Rubio’s remarks were significant for another reason: they made him the first 2016 White House hopeful on the Republican side to unveil a plan for paid family leave — a key issue for Democratic presidential candidates, including frontrunner Hillary Clinton.

Rubio said he opposes Clinton’s plan to mandate paid leave for workers, but he’s pitching his own proposal to help Americans keep their jobs while attending to family responsibilities such as caring for newborn children. His big idea is “a 25 percent non-refundable tax credit for businesses that voluntarily offer at least four weeks of paid family leave.” The benefit would be limited to twelve weeks of leave and $4,000 per employee each year.

“This won’t solve every scheduling conflict between work and family life,” Rubio told the Values Voter audience. “No policy can do that. But it will help ensure that our people don’t have to sit behind a desk while the most profound moments of their lives pass them by.”

The question is how much it will help.

At the liberal New Republic, Bryce Covert wrote Tuesday that Rubio “might entice some companies that are on the fence about offering paid leave to make the switch and get a nice tax break in the process. But what he’s proposed wouldn’t cover the cost of providing leave on its own.”

On Wednesday, Democratic National Committee Chairwoman Debbie Wasserman Schultz told reporters the Rubio proposal “wouldn’t do a thing to help women and families.” She and Rep. Rosa DeLauro, D-CT, objected to the voluntary nature of his concept, saying companies shouldn’t be deciding whether to offer paid leave or not.

In an interview with InsideSources Wednesday, Aparna Mathur of the conservative American Enterprise Institute acknowledged these criticisms.

“As with any incentive program, there’s uncertainly about which employers are going to take it up,” she said. “It is likely that a lot of poorer employers or employers who are smaller in size may not be as likely to.”

Yet Mathur generally likes Rubio’s plan, which she called “a step in the right direction.” She said the senator was right to avoid proposing a mandate that could be “a disincentive for employers to hire women who are likely to take advantage of that paid leave.” She’s also glad to finally see a Republican join the conversation on this issue, which is particularly important to women voters.

Mathur did offer one alternative idea, saying the federal government should modify existing tax credit programs to cover the cost of paid leave: “Why not just allow advanced payments on these [annual] programs so that every family that feels the need to get that money can have access to it?” she said. “You’re not mandating something. It’s not a huge cost to the employer. It’s not a new federal program.”

Of course, a new federal paid leave program is exactly what Democrats are advocating.

“You shouldn’t have to win the geographic lottery to get access to a wage floor that allows you to feed your family, and you shouldn’t have to win the boss lottery to get access to paid leave,” U.S. Secretary of Labor Tom Perez said Tuesday at the liberal Center for American Progress. “It shouldn’t be a luxury, because the most important family value is the value of time that we spend with our children.”

If nothing else, Rubio is certainly adopting some of Perez’s rhetoric on this subject. A clear variation of that last line from the secretary — “the greatest gift a parent can give their children is the time we spend together” — appeared in the senator’s speech Friday.