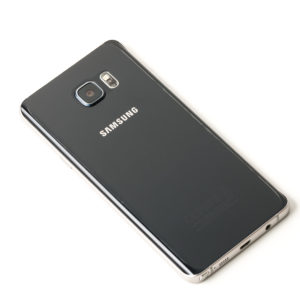 Samsung Previews Argument for Next Phase of Apple Patent War

A Samsung lawyer previewed Tuesday what could be the company’s argument when it goes back to court with Apple to determine what design patents protect; a key question left unanswered in its Supreme Court victory over the iPhone maker.

“For design patents there’s an additional and special design patent damages provision that can be asserted,” Samsung’s Washington general counsel Karin Norton said Tuesday. “A design patent holder can receive the total profits from an infringer for the total profits on the ‘article of manufacture’ to which the patented design has been applied. And that last sentence is what went up to the Supreme Court.”

The Supreme Court ruled on the case in December, saying Apple can’t claim the total profit of Samsung Galaxy phones for infringing on Apple design patents for the iPhone’s rounded corners, front face and grid of app icons. The court agreed with Samsung that complex devices like smartphones containing thousands of components can’t be subject to total profit damages for certain infringing components.

“[A]rticle of manufacture is broad enough to encompass both a product sold to a consumer as well as a component of that product,” Justice Sonia Sotomayor wrote in the court’s unanimous decision.

But justices declined to answer what design patents actually protect, and sent the case back down to the Federal Circuit Court of Appeals, which previously ruled for Apple.

“As a result you have to figure out what the article of manufacture is that you receive the total profits on,” Norton told an American Enterprise Institute panel.

Now it will be up to the lower court to devise a test to determine what the article of manufacture accused of infringing on a design patent is, and set a new precedent for interpreting a 140-year-old statute.

Step one, she said, is to look at the patent and figure out what portions of the accused product the design has been applied to. Next step is determining the portion of the product’s profits that can be attributed to the infringing components.

“Assume with me for the moment that you are the design patentee for the entire shark body of the Corvette,” Norton said. “What you have patented is the entire exterior of the car. You look at the patented design, which is the entire interior, [and] you look at the accused product. [It] may have taken the overall shark design of the car. Then you have to ask the question, ‘Well how much profit on the car is due to the overall appearance of the shark body of the Corvette?'”

Samsung attorney Kathleen Sullivan made a similar case before the Supreme Court, saying “it should be open to the patent-holder to prove that the bulk of the profits come from the exterior of the car.”

“It may be that nobody really wants to pay much for the innards of the Corvette or the Beetle,” she argued, adding rhetorically, “If Apple got almost all its profits from the exterior case, people were indifferent to whether they could read their email, navigate, take photos, or any other functions.”

Sullivan told justices any determination should go through a two-prong test to determine what the article is and how much it contributed to consumers’ decision to buy, an argument Norton suggested it may revive in the lower court.

Samsung filed a brief last week asking the court to reject an Apple request to decide the case without further argument.