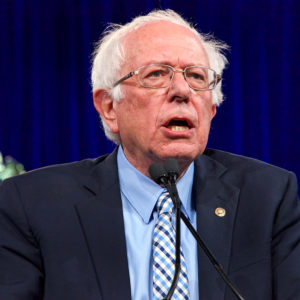 Vermont Sen. Bernie Sanders is the top POTUS pick of Democrats nationwide in the new Emerson College poll released Tuesday night — his fifth-straight first-place finish in a national poll this month. Perhaps even more significant is Sanders’ 10-point lead over former Vice President Joe Biden on the question “Who do you think will be the Democratic nominee?”

According to Emerson, 29 percent of Democrats are supporting Sanders, 22 percent back Biden, 14 percent are with former NYC Mayor Mike Bloomberg and 12 percent support Massachusetts Sen. Elizabeth Warren. Despite their surprising performances in Iowa and New Hampshire, both former South Bend, Ind. Mayor Pete Buttigieg and Sen. Amy Klobuchar of Minnesota lagged well behind in single digits at 8 and 6 percent respectively.

“Sanders continues to build upon his base and has solidified his position as the frontrunner,” said Spencer Kimball, Director of Emerson College Polling. “Biden has lost support, especially among African-Americans, which now opens the door for Bloomberg, maybe Buttigieg or even Klobuchar to win over the moderate voter and become the alternative to Sanders going into Super Tuesday.”

Sanders’ national polling success comes on the heels of numbers from Nevada showing him with a solid double-digit lead going into Saturday’s caucus. One reason for Sanders’ rise is his support among Nevada’s Latino voters. According to a new Telemundo poll, Sanders has tied Biden among Latino voters with about a third of their support. Biden’s hopes for reviving a flailing campaign relies heavily on support from African-American and Latino voters.

The Emerson poll also found that most Democrats believe the likely nominee is Sanders (32 percent) not former frontrunner Biden (22 percent). At 16 percent, Bloomberg is the only other candidate in double digits on this question.

“Senator Sanders definitely has the narrative advantage at this point — despite razor-thin wins in Iowa and New Hampshire — and he and the other campaigns know it,” Democratic strategist Lynda Tran of 270 Strategies told InsideSources. “If his team’s focus on Latino organizing over the past several months pays off the way they are anticipating, he will have important momentum heading into South Carolina.

“All that said, this race is still wide open. With more than 1,300 delegates across 14 states up for grabs on Super Tuesday March 3, I’d say it is too soon to tell by a mile who will walk away with the nomination,” Tran said.

Emerson also asked Democrats about potential vice presidential candidates and , while the candidates say it’s too early to talk about running mates, the candidates most often named as best pick for VP were Harris (20 percent), Yang (18 percent) and 2016 POTUS nominee Hillary Clinton (16 percent).  Earlier on Tuesday, Clinton shot down talk of a potential VP slot.

In a question of special interest to Iowa and New Hampshire, 60 percent of Americans say the presidential primary system should stay the same as it is today, versus 40 percent who’d like to see a national primary election on a single day.

And in a fascinating glimpse into the minds of voters, Emerson asked if they believed accused pedophile and Bill Clinton friend Jeffrey Epstein had committed suicide as authorities claimed, or if he was murdered. Only 21 percent of Americans accept the official account of Epstein’s death, while 46 percent believe he was murdered and 33 percent aren’t sure.

The percentage of President Trump’s supporters who believe Epstein was murdered: 56 percent.