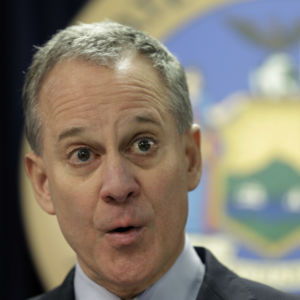 Nearly ten months after opening a probe into claims that ExxonMobil led a conspiracy to conceal the risks of global warming, New York Attorney General Eric Schneiderman appears to be abandoning that legal premise, dealing a blow to prominent environmental activists who have pushed for an investigation modeled after the landmark prosecution of tobacco companies for misleading the public about the danger of smoking.

In an interview published in The New York Times, Schneiderman said he had become less focused on the fact that the company funded conservative think tanks and other groups from the 1990s to the mid-2000s that raised questions about the risks of climate risks. Instead, he said he is looking into whether the company’s forecasts of the value of its reserves is off by a significant amount because it deliberately omits the full impact of climate change in those forecasts.

“In other words, the question for Mr. Schneiderman is less what Exxon knew, and more what it predicts,” the newspaper reported, summarizing Schneiderman’s latest legal position.

In the interview, Schneiderman indicated that he believes that continuing to dig into ExxonMobil’s past conduct and statements is no longer central to his inquiry. “The older stuff really is just important to establish knowledge and the framework and to look for inconsistencies.”

The comments represent a significant shift and undercut a main legal theory of the so-called #ExxonKnew campaign that activists have organized around the notion that ExxonMobil had sought to raise questions in the public’s mind about the dangers fossil fuels pose to the climate, even though the company’s own scientists had identified those dangers many years before.

In fact, reports by Inside Climate News and Energy & Environment Fellowship Project at the Columbia School of Journalism – both of which receive funding from private foundations opposed to fossil fuels – provided momentum to the Schneiderman investigation. The reports claimed ExxonMobil was well aware of the risks of climate change from its own scientific research but sought to keep that research from the public.

And earlier this year, InsideSources reported on a New York press conference hosted by Schneiderman that also featured former Vice President Al Gore and the attorneys general of several other states. Much of that press conference featured Schneiderman and Gore attempting to draw parallels between the RICO cases brought against Big Tobacco for lying about the risks of smoking and the climate skepticism that has been expressed by ExxonMobil in the past. Schneiderman and Gore both insisted that such claims were not a publicity stunt to score political points.

The company has long maintained that the claims that its scientists had reached a clear understanding of climate change before the rest of the scientific community around the world is “preposterous.”

Some news organizations and legal experts have made clear that the history of ExxonMobil is different from that of Big Tobacco. “The history at ExxonMobil appears to differ [from that of Big Tobacco], in that the company published extensive research over decades that largely lined up with mainstream climatology,” reported the New York Times. In that same article, the Times goes on to point out that ExxonMobil made disclosures to investors about the risks of climate change.

Developments since the New York press conference have shown Schneiderman and Gore were wrong. One of the other attorneys general joining Schneiderman and Gore in New York, Claude Walker of the Virgin Islands, was recently forced to drop his investigation into RICO charges against the company.

In the New York Times interview, Schneiderman essentially revealed that his costly investigation proved that same point—that the parallels he and others have drawn to Big Tobacco were little more than hyperbole. Now, Schneiderman, needing to assuage the environmental activists and wealthy donors that he conspired with to attack the company, has moved the investigation in a desperate direction by attempting to prove that the company didn’t correctly predict the world’s political future. Schneiderman believes Exxon and other energy companies may be overstating their assets because they’re not accounting for the possibility of political action to stem climate change.

Such political action has not occurred. And it seems unlikely to occur any time soon. There is a thirst for energy in the developing world, and major consumers, such as the United States, are hesitant to implement policies that will drastically increase energy costs or restrict energy exploration. So most rational observers recognize that, more than likely, we are going to continue drilling and fracking for some time to come. But Schneiderman seems to think he can prove Exxon is clairvoyant enough to foresee that most of its reserves will be left in the ground and that the company, a modern Cassandra, then chose to lie to its investors about its prophesies, thus committing fraud.

Schneiderman’s investigation is also expected to show #ExxonKnew years ago that Donald Trump would win the GOP nomination, James Comey would decline to charge Hillary Clinton, and Gary Johnson would be the next president of the United States.