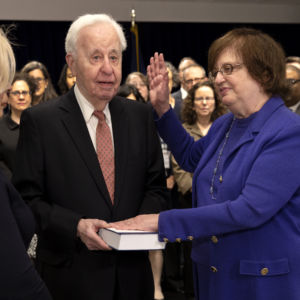 Schneiderman Is Out, but What Will Happen to #ExxonKnew?

For more than two years, oil giant ExxonMobil has been engaged in a seemingly unending series of lawsuits filed by state attorneys general alleging that the company misled investors about the harms of climate change. The lawsuits, which were plotted during a meeting in La Jolla, California in 2012, were spearheaded by New York Attorney General Eric Schneiderman. When news broke that Schneiderman had assaulted several women he had had relationships with, his resignation appeared a foregone conclusion. The future of the lawsuits, however, is more of an open question and may depend on who is tapped to replace Schneiderman as state attorney general after Barbara Underwood’s completes her interim term.

In a statement released late on Monday, Schneiderman acknowledged the “serious allegations,” which he said would “effectively prevent me from leading the office’s work at this critical time.”

“It’s been my great honor and privilege to serve as Attorney General for the people of the State of New York,” he said, before resigning his position effective by the end of the day, Tuesday.

Schneiderman’s aggressive actions against Exxon had to be repeatedly walked back as his legal strategy would reverse directions entirely. Some officials viewed his legal campaign as an attempt to chill free speech rights. Many experts believed his criticisms were not grounded in market realities. And Schneiderman himself got caught on the defensive as he refused to release potentially-damaging correspondence in which his office coordinated its attacks on Exxon with climate activists.

Solicitor General Barbara Underwood will replace Schneiderman as interim attorney general until the state legislature can appoint an interim successor. Voters will select a replacement to complete Schneiderman’s term during the midterm elections.

In the meantime, as holder of the office of attorney general, Underwood will be responsible for decisions regarding the ongoing lawsuits against Exxon. Although in theory she could decide to drop the controversial lawsuit, in her previous role as solicitor general, she signed off on several other lawsuits aimed at forcing the reduction of climate emissions.

Underwood is unlikely to deviate from the anti-fossil fuel direction that the attorney general’s office adopted during Schneiderman’s tenure. Previous cases have already demonstrated her focus on going after energy companies through force of law and, if necessary, court orders. During her lengthy career, she has argued before the Supreme Court 20 times, including a key case arguing that utilities violated state tort and public nuisance laws by contributing to global warming. This argument is very similar to that brought forward by San Francisco and other cities in California and Colorado against oil companies.

In 2011, Underwood argued American Electric Power Co. v. Connecticut, before the Supreme Court, a case that directly addressed if states could use nuisance laws to force utilities to lower their carbon emissions.

Thus far, environmental groups are confident that the lawsuits will continue. Kate Kiely, deputy director of national media at the Natural Resources Defense Council, told Morning Consult that the group expects “litigation to move forward under the Acting AG and the new AG, once appointed.”

Massachusetts Attorney General Maura Healey, who joined Schneiderman in lawsuits to hold energy companies accountable for climate change, reiterated her commitment to the cause after Schneiderman’s resignation.

“The American people deserve answers from executives at Exxon about what they knew about the impact of burning fossil fuels on our climate, when they knew it, and what they told their investors and the world. Our state’s highest court has ordered the company to turn over documents. We look forward to continuing our critical investigation,” she said in a statement via email to Climate Liability News.

In light of these announcements, it is highly unlikely that Exxon would see the lawsuits go away in the coming weeks. However, the transition between attorneys general could offer the energy company an opening in strategy. This remains to be seen.

Exxon shares closed up a fraction of a point on Tuesday.