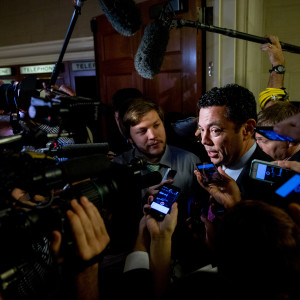 Secret Service Director Joseph Clancy told Congress Tuesday that more than 40 agency employees who illegally accessed a personnel file of Utah Rep. Jason Chaffetz will be suspended up to 12 days each.

Appearing before a joint hearing of House and Senate Homeland Security subcommittees, Clancy apologized again for the breach, which occurred earlier this year after the Utah congressman began looking into an ongoing pattern of agency misconduct.

Clancy added, under questioning, that the highest ranking agent involved in the scandal, Assistant Director Edward Lowery, remains under investigation and could face a more severe punishment, including the loss of his job.

Clancy said he is trying to address “morale problems” at the root of some of the “inexcusable and unacceptable” misconduct detailed in a report released two months ago by the Homeland Security Department’s inspector general.

According to the report, at least 40 agents improperly accessed files on Chaffetz, including the congressman’s 2003 application to join the Secret Service, and leaked the information to reporters in retaliation for the Oversight and Government Reform Committee’s tough questioning of Clancy and others.

Inspector General John Roth, who appeared at Tuesday’s hearing alongside Clancy, testified that “knowledge of Chairman Chaffetz’s application was widespread and was fueled and confirmed by improper access to the Secret Service database at issue.”

Clancy said addressing the deep-rooted problems at the agency will take time.

“We have to just keep communicating, keep communicating with our people,” Clancy said. “What the Congress is doing today helps us and to our agency because again, the seriousness of what we’ve done in this particular case resonates by these types of hearing.”

But Democrats and Republicans on hand for the two-hour hearing seemed frustrated with the latest round of explanations from Clancy, who took over the agency 13 months ago in the wake of a series of scandals, including agents sleeping on the job, a 2012 incident in Colombia that involved agents caught with prostitutes and numerous breaches of security at the White House and on the campaign trail. (InsideSources broke a story in October 2014 that detailed a 2012 incident in which agents improperly leaked details on the president’s travel schedule).

Rep. Scott Perry, R-Pa., in particular, seemed incredulous after Clancy announced the suspensions: “The most we can hope for  …  the toughest disciplinary action right now is not a loss or revocation of your security clearance, is not a loss of your employment – it’s 12 days suspension. I just want to be clear, is that correct?”

“There’s nothing more corrosive in an organization that has a cultural problem than when misdeeds go unpunished,” said Sen. Ron Johnson, R-Wis.

Clancy, who has been called to testify several times before several committees since taking over the top post in October 2014, came out of retirement to clean up the scandal-plagued agency at the request of President Barack Obama.

But the longtime Secret Service veteran has been dogged by some of the same recurring missteps that cost his predecessor the job.

Clancy’s testimony came on the heels of another public relations mess for the Secret Service, the arrest last week of a 37-year-old Secret Service agent charged with sexting and soliciting what he thought was a minor online — while on duty at the White House. The minor turned out to be a police officer running an online sting operation.

Despite the ongoing problems and congressional scrutiny, the White House has stood by Clancy, and several lawmakers at Tuesday’s hearing took time to laud the agency’s handling of the visit to Washington in September of Pope Francis and the president’s address to the U.N. General Assembly the same month.