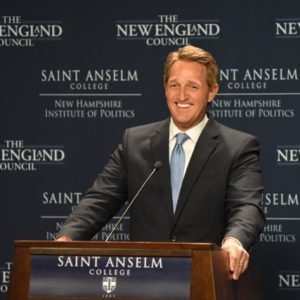 If Sen. Jeff Flake is coming to New Hampshire looking for a warmer welcome than he got in Boston earlier in the day, there’s a group of Granite Staters he may want to avoid:

“My message for Jeff Flake? ‘Grow a set,’” says Kimberly Morin, a grassroots activist on the GOP Right.

Flake is scheduled to speak at the New Hampshire Institute of Politics at St. Anselm’s College Monday night. Many people expect it to be a potential preview of a 2020 primary run. Flake spoke at the NHIOP’s iconic “Politics and Eggs”—a Granite State must-stop for presidential candidates—in March.

Morin told NHJournal that Flake’s handling of the Kavanaugh confirmation is what has her angry right now. “The reality is, Sen. Flake caved to mob rule, and that’s not how this country is supposed to run.”

Steve MacDonald, another conservative who writes for the popular GraniteGrok.com website, agrees. On the issue of a potential 2020 GOP primary run, MacDonald asks “Why would Republicans vote for Flake when he just showed us how easily the Democrats can lead him by the nose?”

“Who wants a leader who decides important issues based on who yelled at him the last time he rode an elevator?,” MacDonald added.

Those are voices from the NHGOP Right, and you’ll find sentiments like those across social media and on talk radio.  But even Granite State moderates like Tom Rath, a former national Republican committeeman and key John Kasich backer in 2016, concede that—at the moment—Sen. Flake doesn’t seem to reflect the mood of his own party.

“He’s speaking to the middle,” Rath told NHJournal, “and the middle is quiet. Whether the middle is even interested in being spoken to right now is another question.”

Rath points out that it’s far too early to assess the realistic potential for a primary challenge to President Trump, but he does see a potential path forward for a candidate like Sen. Flake.

Rath, a veteran of NH presidential campaigns, is quick to point out he’s not predicting this path will be viable a year from now, or that President Trump would lose a GOP primary. “It certainly doesn’t look likely today. But things change.”

The question of whether Trump could face a primary, however, is very different from whether Sen. Flake would be an effective challenger.  “I travel across the state and talk to a lot of Republicans, and they seem to be pretty happy with President Trump” NHGOP Chairman Wayne MacDonald told NHJournal. “The party believes in competition and Sen. Flake is always welcome in the Granite State, but right now our people seem to like the president.”

“I didn’t think Flake could possibly embarrass himself more than he already has, but if he runs in 2020 he will,” State Rep. James Spillane (R-Deerfield) told NHJournal.

Longtime GOP consultant Michael Dennehy, who worked on John McCain’s 2016 Granite State campaign, wasn’t as rude, but he was just as direct:

“Senator Flake, don’t even bother trying,” Dennehy said. “I’m a huge promoter of the ‘First In The Nation’ primary, but the economy is booming and you can’t beat President Trump because you don’t like him or his leadership style.”

But it’s Sen. Flake’s decision to halt the Kavanaugh confirmation and, in the eyes of many New Hampshire conservatives, do the Democrats’ bidding, that has Granite State Republicans truly upset with the Arizona senator.

“What Flake has done to Judge Kavanaugh is disgusting and he should be taken to the cleaners for it,” says Alexis Chiparo, an outspoken Granite State political activist. “I look forward to seeing Trump wipe the floor with him in 2020.”

Shannon McGinley is the executive director of the social-conservative organization Cornerstone, and while she plans to attend Sen. Flake’s speech at the New Hampshire Institute of Politics tonight, she’s “shocked he has time to come.”

“I would assume he’d be too busy with his Senate duties, but perhaps the lure of the FITN state trumps all else,” she told NHJournal.  McGinley says she and her circle of GOP women friends are “outraged” by the treatment of Judge Kavanaugh.

“All we can think about is our sons. How do we ‘Kavanaugh-proof’ them? Even if you tell them to never be alone with a women until they are married, it’s still not enough. What is the lesson in all of this for my five sons – or for any mother?”

According to recent polling, support for President Trump among New Hampshire Republicans is lower than it is in many other states—but it’s still pretty high.  A New Hampshire Journal poll taken in mid-August found that Trump’s support among the state’s GOP voters was 75 percent—a solid number, but still lower than the 85 percent or so he had from Republicans across the country.

In addition, 40 percent of GOP voters said a primary of President Trump would be “a good thing.”

But would Sen. Jeff Flake be a good candidate? Was his decision to give Democrats a delay on Kavanaugh’s confirmation good politics?

“No,” says state senator Sharon Carson (R-Londonderry). “Not with the Republicans I’m talking to. I just don’t see [Flake 2020] happening.”

Sen. Flake would argue that he’s trying to rise above politics and bridge the partisan divide. But just hours before his appearance in New Hampshire, Boston Democrats rallied to protest Kavanaugh and attack Sen. Flake for even considering supporting the nomination.

Meanwhile, in the past two weeks, President Trump’s numbers in the Real Clear Politics average of polls has shot up 4 points, as more GOP voters rally around him in this fight.

To paraphrase Sen. Lindsey Graham, if Sen. Flake is looking to NHGOP primary voters to cheer on his efforts at compromise and bipartisanship, he’s come to the wrong state at the wrong time.