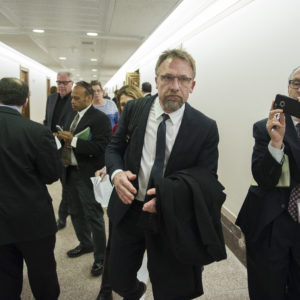 According to the Center for Democracy & Technology (CDT), a Washington-based digital rights non-profit, a report released by lawmakers Monday concluding the site facilitated child sex trafficking acted as a “blow” to free speech by forcing the site to shut down its adult ads section.

“This development is a direct blow to the freedom of speech we enjoy online,” CDT said. “Backpage, like Craigslist before it, has faced a long-running campaign from government officials at every level seeking to force the website to restrict lawful speech as a way to pursue criminal activity by some of the site’s users.”

“After consultation with counsel, I decline to answer your question based on the rights provided by the First and Fifth Amendments,” Ferrer said in response to multiple questions from Ohio Republican Sen. Rob Portman, who chairs the subcommittee.

Portman’s committee released a damning Monday report that found Backpage knowingly facilitated pimping and child sex trafficking by editing ads to appear less suspicious. Hours after, Backpage pulled down its adult services section “[a]s the direct result of unconstitutional government censorship,” according to an announcement on the site.

“Backpage.com has removed its Adult content section from the highly popular classified website, effective immediately,” the announcement reads. “For years, the legal system protecting freedom of speech prevailed, but new government tactics, including pressuring credit card companies to cease doing business with Backpage, have left the company with no other choice but to remove the content in the United States.”

Backpage hosts 80 percent of all online sex ads, according to the report. The National Center for Missing and Exploited Children said in 2015 that 71 percent of all child sex trafficking reports submitted by the public are tied to Backpage ads.

The subcommittee’s year-plus investigation found emails showing Backpage outsourced its ad screening to India between 2010 and 2012, where moderators removed words, phrases and images that would have flagged ads to authorities. Witnesses, including the parents of minors whose pictures appeared on Backpage, said the site was reticent to remove sex ads featuring underage children.

Portman said the move by Backpage confirmed the report’s findings.

“Backpage has not denied a word of these findings. Instead, several hours after the report was issued yesterday afternoon, the company announced the closure of its adult section, claiming ‘censorship,’’ Portman said. “But that’s not censorship, that’s validation of our findings.”

Ferrer, who declined to appear before the same committee last year despite being under subpoena, was arrested in October on charges that his website accepted money in the prostitution of minors. The charges were eventually dismissed by a court in California.

The Supreme Court declined Monday to hear an appeal of a case bought by three victims of the site’s sex-trafficking ads in Massachusetts. The decision upholds the lower court ruling’s defense of Backpage based on the Communications Decency Act of 1996. The law shields websites from liability for content posted by users.

Other digital rights groups including the Electronic Frontier Foundation filed briefs in support of Backpage, a position CDT supports.

“This is an important reminder that our online freedoms remain under threat,” CDT President Nuala O’Connor said Tuesday. “While the fundamental legal framework protecting free speech remains strong, too often we see government officials attempt to circumvent these protections to achieve their censorship goals.”

“When government officials move beyond the bully pulpit and conduct persistent pressure campaigns to achieve a result repeatedly denied to them in court, we’re in the territory of unaccountable government censorship that is anathema to First Amendment values,” she said.

David Greene, director of EFF’s civil liberties division, drew a distinction between the allegations against Backpage and the law.

“We don’t support trafficking,” Greene told The Boston Globe Monday. “We support full enforcement of the laws. You just have to enforce them against the people who are breaking the law.”