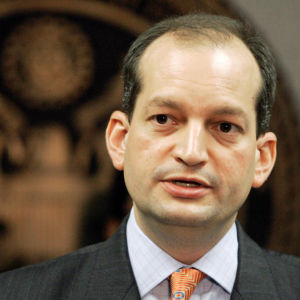 President Donald Trump finally managed to get his labor secretary confirmed Thursday with the process overcoming several delays and setbacks.

Alexander Acosta was nominated to become the next labor secretary Feb. 16. The position remained one of the last major nominations to be filled. The Senate finally reached the end of the process by voting 60 to 38 to confirm the nomination.

The Department of Labor plays a critical role in issuing and enforcing workplace regulations. Acosta is now essentially responsible for overseeing the national workforce. He will likely prove to be critical in implementing the administration’s agenda since so much of it is focused on workers and business.

“Mr. Acosta has excellent credentials, and is well qualified for the position,” Republican Sen. Lamar Alexander, chairman of the Senate labor committee, said before the vote. “He realizes a good paying job is critical to helping workers realize the American dream.”

Those opposed contest that he is just not the right person to lead the department. Democratic Sen. Patty Murray expressed reservations on the Senate floor Wednesday. She believes his background shows he may be overly influenced by political pressures.

“We need a secretary of labor who will remain committed to core principles of the Department of Labor,” Murray, ranking member of the labor committee, said during the hearing. “Someone who will prioritize the best interests of our workforce, enforces laws that protect workers’ rights, safety, and livelihoods, and seeks to expand economic opportunities for workers and families across the country.”

Acosta has been seen by some opponents as a more moderate choice for labor secretary. CKE Restaurants President Andy Puzder was originally nominated for the position by eventually dropped out. Murray agreed, but added not being Puzder shouldn’t be the standard.

Acosta has also received support from the business community. The National Retail Federation believes he will bring balance back to what it sees as an overly politicized department. The International Franchise Association was encouraged by his views that labor regulations have become an unnecessary burden for businesses.

Labor unions were much less encouraged by the nominee. The AFL-CIO argued that his recent testimony before the labor committee March 22 raised serious concerns and doubts. The Service Employee International Union (SEIU) added his testimony didn’t indicate he’d be the kind of leader working families need.

Former President Barack Obama pursued much of his agenda through the department. His administration worked to strengthen worker rights, but those opposed argue he did little to help workers while putting unnecessary stress on employers.

Acosta is an attorney who has served as dean of the Florida International University College of Law. Former President George W. Bush previously appointed him to serve on the National Labor Relations Board (NLRB). He has also been an assistant attorney general and federal prosecutor.

Acosta expressed concern during the earlier committee hearing that opportunities are dwindling for workers. He noted his immigrant parents could always find work despite being poor. He argued that there needs to be a better balance between protecting workers and regulatory burdens.