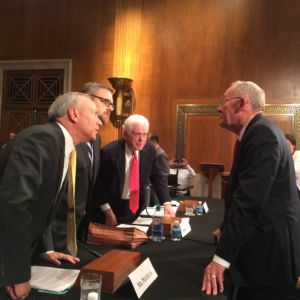 President Donald Trump had his last federal labor board pick confirmed Monday with the Senate voting 49 to 47 in favor of his nomination.

The National Labor Relations Board (NLRB) consists of five members that oversee labor dispute cases. Trump was tasked with filling two vacant seats upon entering office earlier this year. William Emanuel was confirmed to fill the last empty seat during the confirmation vote.

Emanuel was nominated to fill one of the two vacant seats June 27. He has worked as an employment lawyer in Los Angeles for the law firm Littler Mendelson.  His cases have involved union contract negotiations, strikes, and how to administer collective bargaining agreements.

Trump has focused much of his agenda of workers making the confirmation critically important. Former President Barack Obama oversaw the board at a time when it pursued several significant policy reforms. Republicans and the business community have fought to rollback the changes, which they see as unfairly benefiting unions.

Marvin Kaplan was confirmed to fill the other vacant seat August 2. He previously served as the chief counsel of the Occupational Safety and Health Review Commission. Philip Miscimarra was picked to serve as the chairman of the board. He didn’t need to be confirmed since he was already a member and serving as the acting chairman.

Democratic Sen. Elizabeth Warren urged her colleagues prior to the vote to reject the nomination. She argued that his career in law has undermined workers rights by helping companies defeat unionizing efforts. Democrats typically believe that unions are critical to helping workers fight for their workplace rights.

“Mr. Emanuel has over 40 years of experience,” Warren declared from the Senate floor. “In his over four decades of practicing law he has never once been on the side of workers.”

The NLRB was established in 1935 as part of a series of economic-related reforms known as the New Deal. President Franklin D. Roosevelt pursued the economic changes in response to the Great Depression. The reforms included worker rights laws and support for the economically disadvantaged.

The NLRB is supposed to act as an independent judicial body for labor dispute cases. Critics contest the board is politically driven, with the issue becoming radically more pronounced during the last administration. They have argued the board overstepped its authority by unilaterally changing labor law through case precedent.

“It’s essential that the NLRB start to undo the harm caused during the Obama administration, when the board put out numerous job-killing decisions and rules that weaken worker choice,” Trey Kovacs, labor policy expert at the Competitive Enterprise Institute, said in a statement provided to InsideSources. “Top priorities of the NLRB should include: overturning the joint employer decision, which exposes large and small businesses to near-unlimited liability, and rescinding the union ‘ambush election’ rule that threatens worker privacy.”

Obama and his labor board were praised by progressives and unions for the changes it made to labor law. The NLRB focused on union elections, how companies can contract together, and how contract workers are classified. It was able to implement the changes during the last administration by altering how it ruled on cases.

The Obama administration argued the changes were designed to better protect workers. Those opposed denounced his board as being overly activist. They argued it put the needs of unions ahead of workers and their employers. Republicans and the business community hope the new board will bring balance back to the agency.

“William Emanuel’s confirmation will allow for the full consideration of issues directly impacting small businesses, like restaurants, while restoring fairness and balance to the NLRB,” Cicely Simpson, executive vice president of the National Restaurant Association, said in a statement provided to InsideSources. “We look forward to working closely with Mr. Emanuel and the NLRB.”

Trump has also managed to fill other appointments that are important to his economic agenda. Alexander Acosta being confirmed as labor secretary has been one of the most critical of those appointments.