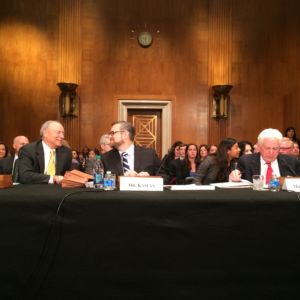 President Donald Trump’s pick to become the next deputy secretary of labor was questioned Thursday by lawmakers on whether he is a good choice to fill the role.

Patrick Pizzella was nominated to become the deputy secretary of labor June 20. The position could prove critical to the president’s worker-focused agenda. Pizzella would be second in command at the Department of Labor (DOL). He asserts his goal would be to protect workers while ensuring the department is functioning properly.

Pizzella also stressed the importance of ensuring workers have the opportunity to access good jobs. Republicans focused primarily on how he will help promote job growth and worker protections. Democrats expressed concern over whether he will uphold the department’s mission to protect workers and unions over employers.

“The Department of Labor is tasked with enforcing laws that keep our workers safe,” Sen. Lamar Alexander, the chairman of the Senate Health, Education, Labor and Pensions (HELP) committee, said during the hearing. “Patrick Pizzella comes with a wealth of experience from both Republican and Democrat administrations.”

Pizzella currently serves as acting chairman of the Federal Labor Relations Authority (FLRA). Trump appointed him to the position Jan. 23. Former President Barack Obama nominated him to be a member of the FLRA back in November 2013. He previously ran his own management consulting firm.

The HELP committee held the hearing to determine whether his nominations should be approved. Alexander Acosta has already been confirmed by the committee to serve as the secretary of labor April 27.

The hearing was also dedicated to two other labor related nominees. Marvin Kaplan and William Emanuel were nominated to serve as members on the National Labor Relations Board (NLRB). Their testimony primarily focused on whether they would enforce the board’s mission by protecting workers in an impartial way.

Trump has made working class issues a cornerstone of his presidency. He has promised to rollback regulations enacted during the last administration in the hopes it will spur job growth. His picks to fill key labor-related positions may prove critical to that mission.

The Competitive Enterprise Institute noted in a coalition letter Jan. 30 the labor department alone imposed $55.7 billion in regulatory costs on employers during the last administration. It adds that during that time the gross domestic product averaged less than two percent while an increased number of people dropped out of the labor market.