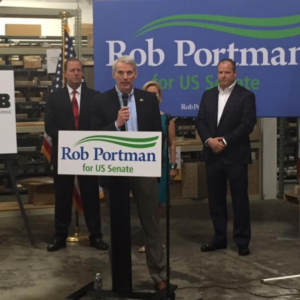 The U.S. senator behind a bill to curb online sex trafficking, which companies like Google claim could “seriously jeopardize the internet ecosystem,” says more tech companies are rallying behind the legislation.

Ohio Republican Sen. Rob Portman said Thursday the Stop Enabling Sex Traffickers Act is about to pick up more backers from Silicon Valley, despite opposition from some major industry players like Google and Facebook.

“We are gaining momentum within the tech community, some of whom have concerns about changing the Communications Decency Act,” Portman said on the Senate floor. “Other tech companies have also joined in the fight to ensure that we can stop sex trafficking. And I know they’re going to follow Oracle’s lead in publicly supporting this legislation.”

Portman’s bill would amend Section 230 of the Communications Decency Act (CDA), a law granting broad immunity to websites from being held liable for content generated or posted by users. It was the basis of classified ads website Backpage’s legal defense after CEO Carl Ferrer and executives were arrested and charged with accepting money in the prostitution of minors.

The charges resulted from an 18-month Senate investigation led by Portman and Missouri Democrat Sen. Claire McCaskill that found Backpage knowingly facilitated pimping and child sex trafficking by editing ads to appear less suspicious. Despite overwhelming evidence, both federal and state courts upheld Backpage’s defense, adding Congress would have to amend Section 230 before the websites like Backpage could be held accountable.

Portman’s bill, co-sponsored by McCaskill and a total of 26 senators — including eight Democrats — would “eliminate federal liability protections for websites that assist, support, or facilitate a violation of federal sex trafficking laws.” It would also empower state law enforcement “to take action against individuals or businesses that violate federal sex trafficking laws” even without Justice Department participation.

There’s already companion legislation in the House of Representatives boasting more than a hundred co-sponsors, almost half of them Democrats. A Google lobbyist asked House members not to support the bill in August, arguing, as others in Silicon Valley have, that it would hold web services accountable for content posted by users, potentially subjecting them to criminal lawsuits and civil restitution. Media outlets friendly to Google and other tech giants have also voiced opposition.

Portman praised Oracle on the Senate floor, saying others would soon follow publicly but neglected to name them.

“They agreed that this narrowly-crafted bill will hold bad actors accountable while protecting well-intentioned websites,” Portman said. “Oracle’s letter says in part, ‘your legislation does not, as suggested by the bill’s opponents, usher the end of the internet. If enacted, it will establish some measure of accountability for those that cynically sell advertising but are unprepared to help curtail sex trafficking.’”