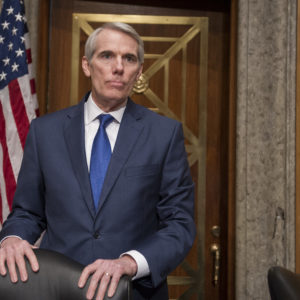 A U.S. Senate bill designed to eliminate legal protections for websites knowingly hosting child sex-trafficking ads became the target of tech giants like Google in August, but it’s Silicon Valley-friendly media outlets that are doing the fighting for them.

Backpage “coached its users on how to post ‘clean’ ads for illegal transactions, and knowingly edited ads to conceal evidence of crimes,” according to Portman. Its CEO, Carl Ferrer, became the first congressional witness to duck a Senate subpoena in 20 years during the investigation when he refused to show up for questioning. Ferrer and other Backpage executives were arrested last October on charges Backpage accepted money in the prostitution of minors.

Backpage shuttered its adult ads section in January, the same day the Senate released its report finding the website hosted 80 percent of all online sex ads (the National Center for Missing and Exploited Children (NCMEC) said in 2015 that 71 percent of all child sex trafficking reports submitted by the public were tied to Backpage). It further highlighted emails showing Backpage outsourced its ad screening to India between 2010 and 2012, where moderators removed words, phrases and images that would have flagged ads to authorities. Witnesses, including the parents of minors whose pictures appeared on Backpage, said the site refused to remove sex ads featuring identified underage children.

Despite the evidence, Backpage prevailed in court — twice. In 2016, the First Circuit Court of Appeals ruled in Backpage’s favor because of immunity granted to the website under section 230 of the Communications Decency Act (CDA)–the statute, passed in 1996, that gives broad immunity to websites from being held liable for content generated or posted by users.

Backpage won again in a California court in August based on the same statute, with the court opining “until Congress sees fit to amend . . . section 230 . . . [it] even applies to those alleged to support the exploitation of others by human trafficking.”

That’s when Portman and McCaskill introduced SESTA, a bill aimed at amending section 230 to “eliminate federal liability protections for websites that assist, support, or facilitate a violation of federal sex trafficking laws.” It would also empower state law enforcement “to take action against individuals or businesses that violate federal sex trafficking laws” even without Justice Department participation.

The bill has the support of 26 senators including eight Democrats. Despite the rare showing of bipartisanship, it doesn’t have the backing of Silicon Valley itself, or prominent Valley-focused media outlets.

A New York Times op-ed published Thursday highlights Google’s efforts to fight the law, in part via a letter from Google lobbyist Stewart Jeffries asking lawmakers in the House of Representatives not to sponsor similar legislation from Missouri Republican Rep. Ann Wagner.

Wagner’s bill, the Allow States and Victims to Fight Online Sex Trafficking Act of 2017, would take away section 230 protection for online entities engaged in “knowing or reckless conduct . . . that furthers or in any way aids or abets” child sex trafficking. It also empowers states to enforce federal laws and lets victims sue violators for civil restitution.

“I wanted to bring to your attention an issue that is picking up steam in the Senate and the House that has the potential to seriously jeopardize the internet ecosystem,” Jeffries wrote.

Since his letter, Wagner’s bill has picked up another 50-plus co-sponsors for a total of 116, including 74 Republicans and 42 Democrats. But the strong agreement on Capitol Hill isn’t so uniform among media, where outlets like The Verge and Salon, often champions of Silicon Valley and left-leaning politics, criticized legislative efforts to curb online child sex-trafficking.

The Verge described the bills as efforts to “further eviscerate CDA 230” and said Backpage “allegedly hosted ads from sex traffickers,” declining to acknowledge the mountain range of evidence from the Senate Subcommittee on Permanent Investigations, the NCMEC, numerous state attorneys general, and a Washington Post investigation that found Backpage “uses a contractor in the Philippines to solicit sex ads from other websites and also posts sex ads on other sites to attract more customers.” Instead, the outlet criticizes a press release for the House bill for citing Backpage six times.

It goes on to warn “a state could piggyback off the legislation to create a new law that would impose liability for all posts promoting the sex trafficking of children unless a site prescreens content or user registrations. This could potentially empower any one state in the U.S. to create a new regulatory regime for the entire web.”

A Salon article agrees the legislation “could significantly curtail internet freedom,” the author going on to liken the bills’ aims to combat online child sex trafficking as a way to facilitate “every ambitious prosecutor who wants a headline.”

“Furthermore, SESTA’s language is so broad that it could lead to state lawsuits and prosecutions of sites that don’t carry any advertising at all,” the Salon article reads. “It could sweep in every online service that hosts user-generated content—perhaps even including email services and comments sections.”

The article, authored by the former general counsel for the Wikimedia Foundation, appeared in Salon’s “What Is Future Tense?” blog, a section on technology policy co-sponsored by New America Foundation. The prominent Google-funded, left-leaning lobbyist group came under fire in August for firing a well-known Google critic at the behest of the search giant.

Portman disagrees with those characterizations of the bill and others in more prominent outlets like Forbes. In a Thursday Fox News op-ed, Portman said the legislation “only removes protections for rogue online actors that knowingly facilitate and participate in sex trafficking.”

“This bill does not affect liability protections for websites that obey the law,” Portman wrote. “In fact, it preserves the Communications Decency Act’s ‘Good Samaritan’ provision, which protects good actors who pro-actively block and screen for offensive material.”

“[W]e are 100 percent confident that a Portman/Blumenthal amendment – identical to S. 1693 – offered to the Communications Decency Act in 1996 would have passed the Senate overwhelmingly and the internet would have enjoyed the same exponential growth and innovation over the past twenty one years,” Oracle CEO Kenneth Glueck wrote to Portman. “Frankly we are stunned you must even have this debate.”

The company, a frequent Google critic, took the opportunity to take a thinly veiled shot at the search giant.

“Your legislation does not, as suggested by the bill’s opponents, usher the end of the internet,” the letter reads. “If enacted, it will establish some measure of accountability for those that cynically sell advertising but are unprepared to help curtail sex trafficking.”