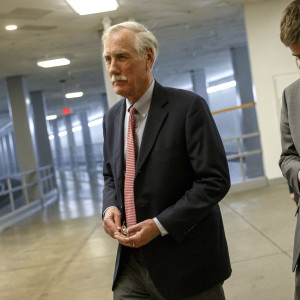 A member of the Senate Intelligence Committee, and the only independent left in the upper chamber, warned Friday the government’s push to make Apple build a back door into iPhone encryption could lead to more deaths, instead of preventing them.

“I have encryption to deal with, I’m denied some information, as a result I don’t get a terrorist and people die. Would you say that would be worth it to protect people’s privacy?” NPR’s Steve Inskeep asked Maine independent Sen. Angus King during an interview Friday.

“I would say it would be worth it if you could demonstrate that would be the case, and the results and ramifications around the world wouldn’t lead to more problems and more people dying,” King answered. “It’s a very complex issue and that’s why I think we need to decide it.”

The battle between the FBI and Apple over the iPhone’s default end-to-end encryption, which not even Apple can unlock without a user’s password, ramped up this week after a federal judge in California ordered the Silicon Valley giant to help investigators unlock the iPhone of one of the shooters in the attack in San Bernardino last December that left 14 people dead.

“It might push terrorists onto some other encrypted app that we can’t get at, or some other way that we’d lose track of them,” King said.

The Maine independent pointed to terrorist suspects who stopped using Yahoo Mail after National Security Agency whistleblower Edward Snowden revealed through classified document leaks in 2013 that the NSA was heavily surveilling the platform.

King said Congress should decide the issue, not a single federal district judge.

“The problem with what’s happening in this case is it’s purporting to make a very big change in the law by one judge under a 1789 statute,” King said. “This court case is kind of a shortcut around the public policy process.”

The reputable moderate highlighted the court’s request for Apple to build something that doesn’t exist, and something Cook said is too dangerous to create because of its potential to be exploited by hackers and abused by authoritarian regimes.

“What do we do if we pass a law that says this has to be done, and then China says, ‘Oh well then okay, we’re going to pass that law too and we want access to every iPhone in China.’ Iran says the same thing, Russia says the same thing,” King explained. “The bad guys go underground, they’ll shift to some other encrypted platform.”

King said he could argue the case from both sides, justifying all the more Congress’ need to examine the issue through committees and commissions hearing input from law enforcement and the tech community, an idea already proposed by House Homeland Security Committee Chairman Mike McCaul.

“To decide it in this case is I think the wrong approach,” King said. “There’s an old saying in law school — ‘hard cases make bad law.'”

“To say that it will only apply to this case,” King said of the court’s request, “that just doesn’t wash.”

University of Nebraska law professor Gus Hurwitz took a different approach to the case in a Friday op-ed on AEI’s TechPolicyDaily.com, arguing the case is less about encryption and more about destroying evidence.

“Apple has designed its products with an easily enabled self-destruct feature,” Hurwitz wrote. “That is, they have designed their products to destroy evidence that the government routinely would otherwise have legitimate need for and access to.”

The visiting AEI fellow said the case “is about an otherwise unquestionably legal search of a single device owned by a single person — a single dead person, unquestionably connected to a crime, who has no expectation of privacy or other protections under the 4th or 5th Amendments.”

Though the 1994 law makes no mention of encryption, the government has succeeded in expanding the legislation’s reach to cover portions of the Internet, but not handset devices.

“The FBI has chosen to proceed as it has in this case for a very simple reason,” He continued. “There is probably no better set of facts to support its argument that we can’t allow companies to develop their products knowingly and intentionally in a way that will lead to the routine destruction of evidence.”