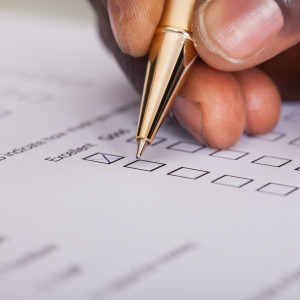 Although my entire career in politics has been on the side of creating and delivering messages, as well as managing the overall effort, I have long been a strong supporter of a data-based decision process. In particular, my reliance on survey research information to formulate strategy and message is near absolute in nature. One of my colleagues remarked that the wonderful thing about polls is they rendered people’s opinions unequal. What he meant, and what is right, is that if you believe a poll is accurate, then arguing about what people are thinking on a given topic no longer becomes a discussion where the best debater wins. The numbers are the numbers.

Before anyone jumps the gun and screams this approach of basing strategy and message is another example of how tricky, overpaid political professionals “package candidates” and deceive the public, take a breath. Candidates have lots of positions on lots of issues. What to emphasize and identifying language that is both honest and entirely consistent with what a candidate believes to advance that candidacy is what professionals should be doing.

Going back to the matter of polling, the key sentence in that first paragraph would be: The numbers are the numbers. Therein lies our current problem. The adage of garbage in, garbage out comes to mind. When the survey results are so different from reality, as has been the case far too often in recent elections, all of us in the profession are left in a genuine quandary.

The pollsters with whom I work are serious, dedicated, and honest. They turn themselves inside out to both generate accurate information and then give that information context and meaning. Still, if the numbers are wrong in the first place, then it really is “Houston, we have a problem.”

At least within the Republican Party, I have a specific idea to suggest. We need to convene a summit on this subject under the auspices of the Republican National Committee (RNC) and probably the other national party committees (Senatorial Committee, Congressional Committee, and Governors). We should bring together all the pollsters. In addition, the strategists and communicators who rely so heavily on the data ought to be part of the conversation.

It is pretty clear what the two big problems would be. First, the sample surveyed too often does not actually represent an accurate reflection of whatever population of the whole it is supposed to represent, certainly not within the margins of error or confidence intervals stated in the survey. Second, the secret sauce sprinkled on the raw data to “weight the sample” in an attempt to have the numbers be consistent with what turnout will be among various groups has turned sour.

Everyone seems to be familiar with the difficulties of conducting an accurate survey connected to the decrease in landlines, the cost and time problems of emphasizing mobile phones, a seeming difference in those who will participate in a survey and those who will not, and limitations associated with online data.

No longer is it enough to repeat what the problems are as an explanation, much less excuse, for the inaccurate information that is too prevalent in survey research these days. Instead, we need to examine a range of options to generate more accurate data, then test them until we hit upon the approach – or more likely combination of approaches –that will allow a return to a confidence in the information that is borne out by what happens on Election Day.

For those of us putting together strategies and messages, the need to be able to rely on survey data to make decisions is fundamental and critical. The professionals in the research field are deserving of our support to get us back to where we need to be. Surely, nobody wants the numbers to be right more than they do.

We cannot live with what is now the status quo. Let’s put a process in place to get us back on the right path.