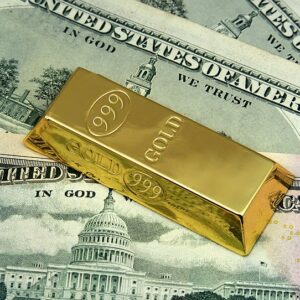 POINT: Should the U.S. Return to the Gold Standard? No.

Editor’s Note: For another viewpoint, see COUNTERPOINT: Is the Gold Standard the Economists’ Punching Bag?

Fifty years ago next month, with inflation rising and growing trade deficits, President Richard Nixon suspended the conversion of the U.S. dollar into gold. This decision effectively ended the Bretton Woods system — the final attempt at an international gold standard — and ushered in a new era of floating exchange rates between major currencies, rather than rates fixed by policymakers.

The end of gold-backed money and fixed exchange rates has been controversial, but it remains the right decision.

Former congressman and presidential candidate Ron Paul decided to first enter politics because of his disappointment with Nixon’s decision. Some commentators have argued floating exchange rates are a major source of instability and seek a return to some sort of Bretton Woods-style arrangement. Many argue that as a rules-based monetary policy, a new gold standard would constrain central banks (including the Federal Reserve) from creating inflation, and fiscal policymakers (including Congress) from running unhealthy budget deficits.

While central banks should pursue a more accountable, rules-based approach to monetary policy, a new gold standard would do much more harm than good.

In 1944, representatives from the Allied powers developed Bretton Woods for the postwar era. Their goal was to create a regime that produced exchange rate stability in a tumultuous world, while also giving each nation’s central bank latitude to pursue its own policies.

The dollar was set at $35 per ounce of gold. Other currencies, such as the British pound and German mark, were pegged to the dollar, but these pegs could be adjusted. It took nearly 15 years to get the system running, and even then, it suffered from major flaws that gave it a short lifespan. For example, in 1967, the United Kingdom had difficulty maintaining its peg, so it devalued the pound. This boosted exports but also raised inflation.

Challenges in the United States ultimately led to Bretton Woods’ demise. Large trade deficits with West Germany and Japan and large budget deficits under the Johnson and Nixon administrations led to more U.S. dollars held abroad. Eventually, there was not enough U.S. gold to redeem those dollars. Recognizing this, speculators sold their dollars, causing “runs” on the currency and making it even more difficult for the United States to maintain its exchange rates with other countries. Nixon suspended the dollar’s conversion into gold, and although he announced that the suspension would be temporary, the system was never salvaged.

While one can argue that Bretton Woods used a poorly designed gold standard — giving too much room to governments to pursue monetary and fiscal policies and creating tension within the system — this does not mean we should return to another gold standard, even one like the relatively well-functioning pre-World War I classical gold standard.

The classical gold standard period was an era where central banks either did not exist or had much less discretion, where prices were more flexible, and where the public did not expect governments to provide modern social services. These conditions simply do not exist today.

In at least some respects, central banks are already taking steps toward a more rules-based monetary system. Beginning in the 1990s, many began targeting 2 percent inflation, and inflation since then has generally been low across the developed world (the recent uptick notwithstanding). Last year, the Fed modified this goal by targeting 2 percent inflation on average over time, which means making up for past misses of the target.

An even better goal would be to target total dollar spending in the economy, or nominal gross domestic product. Among the differences in this approach is that it allows inflation to rise temporarily in response to recessions. This reduces the severity of debt burdens and stimulates the economy’s recovery. It also allows inflation to fall during economic booms, helping consumers. Moreover, nominal gross domestic product targeting can be rules-based, making policy more predictable and constrained.

David Beckworth is a senior research fellow at the Mercatus Center at George Mason University and a former international economist at the Department of the Treasury. He wrote this for InsideSources.com.

Patrick Horan is the program manager for monetary policy at the Mercatus Center at George Mason University. He wrote this for InsideSources.com.