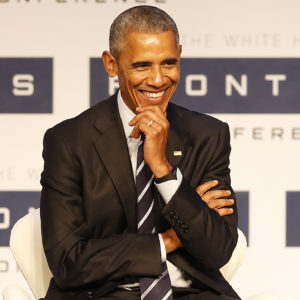 In an election cycle with a four-times failed business mogul and a paid Wall Street sympathizer as the candidates to lead an economy sporting dismal GDP growth and a middle class sinking into a wage chasm, it’s easy to understand why many Americans think the “American Dream” is no longer possible.

“Your chances of achieving the American Dream of climbing the income ladder look almost twice as high in Canada than in the United States,” Chetty said Thursday during the White House Frontiers Conference in Pittsburgh.

Chances aren’t the same across the board. De-identified data for all children born in the 1980s shows a rate of 18.5 percent in San Francisco — higher than Canada — while Atlanta and Charlotte have rates below 4.5 percent, “lower than any country for which we currently have data,” Chetty said.

Harnessing big data across cities with smart, internet-connected infrastructure is one solution, Roman Mars — host of the architecture and design podcast “99% Invisible” — told attendees, much the same way companies use big data to improve products.

“Cities can work pretty well, but there are always inefficiencies inside of a machine,” Mars described over a Radiolab-esque techno soundtrack. “At the heart of the smart city movement is this notion that if we measure it, we can optimize it. A smart city is interconnected with sensors everywhere that intake information. We crunch that big data and then we make the city adapt to what’s going on.”

Mars gave the example of smart parking meters, capable of sensing a parked car and dynamically adjusting the price when all parking is filled “so that one space is always available on every block so cars are no longer circling around looking for parking.”

“Thirty percent of cars at any moment are looking for parking, which makes everything in a city run slower. It’s a stupid waste, and in a smarter city, it can be eliminated,” Mars said. “Given enough data and enough flexibility, thousands of inefficiencies like parking can be minimized or eliminated completely.”

Mars said the same concept can be applied to human capital, which big data shows is being wasted in “huge” amounts because people aren’t being provided with the right infrastructure or they aren’t physically in the right place to succeed.

Using big data described by Chetty can help policymakers develop more programs to target and move families to areas with higher social mobility, and identify the environmental factors that make them better areas. Factors like segregation and industry have a significant impact on how children develop, Chetty explained, showing how equal ratios of races in Atlanta and Sacramento, but a much higher level in racial segregation in the former, correlate with a huge gap between Atlanta’s social mobility and Sacramento’s, well above 10 percent.

Data in Minneapolis, which has a strong medical device manufacturing industry, and San Francisco, the heart of Silicon Valley, shows kids from those areas have a higher chance of developing medical and computer patents respectively, while kids with high third-grade math scores and higher income parents are more likely to be future patent holders overall.

Such environmental data will help government agencies and private companies target internships and education programs in specific areas to bring kids into the environment they need, in addition to giving social workers, like Urban Strategies President Sandra Moore, the data they need to help low-income families nurture the environment kids need for success.

“The big data Raj is talking about really works for us as practitioners on the ground,” Moore said. “It feels big, but for us it really customizes what we need to know about children and families who need an opportunity to move, to climb onto the socioeconomic ladder.”

“We can’t move everyone,” she continued. “So there have to be ways to create in place some of the things that we see from his data are essential to people moving” like technologically innovative transportation and affordable housing.

Monitoring such data and implementing the infrastructure of the future in cities will require the broad deployment of 5G, the next generation of wireless networks, according to Richard Adler, president of Silicon Valley consulting firm People & Technology and author of “Preparing for a 5G World.”

5G has the potential to move 10 to 100 times faster than today’s 4G networks, speed essential to the growing internet of things and to automate in real-time advances like self-driving cars.

“It’s my hope that the discussion includes 5G networks that will be the foundation for many of the technological frontiers the president seeks to advance, including building smarter, more inclusive local communities, extending remote medical monitoring, leveraging big data, and addressing transportation challenges,” Adler said of the conference earlier in the week.

“The U.S. will have to densify its existing wireless network by deploying significantly more infrastructure including towers and large numbers of high performance small cells,” Adler told reporters. “And to make this happen, there will need to be expanded cooperation between public and private entities.”

The White House on Thursday announced its own support through the Department of Transportation with $165 million to help cities including San Francisco, Los Angeles, Denver, Houston, Pittsburgh, Buffalo and Marysville, Ohio develop smart city technology “targeted at relieving congestion and improving safety of urban transportation networks.”

The Obama administration announced a total of $300 million for science and technology initiatives, including $50 million to develop dense, small satellite deployment and $70 million to the National Institutes of Health to “help researchers better understand the brain and, ultimately, uncover the mysteries that hold the key to future scientific breakthroughs in areas such as Alzheimer’s and Parkinson’s diseases, depression, and traumatic brain injury.”