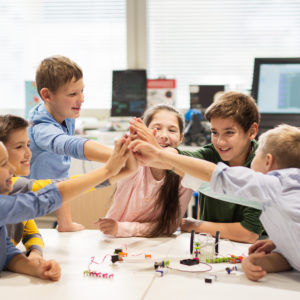 Inside the Efforts to Measure Social Emotional Learning Progress

What is the best way to scientifically measure whether a school’s Social Emotional Learning (or SEL) program is working? A team of top researchers is in the process of creating a guide that they say will help educators collect actionable data to refine their work in the growing the field.

SEL, or teaching students skills that include managing their emotions and empathizing with their peers, is in vogue among education policy-makers, researchers, and reformers. Recent studies have emboldened supporters of the trend who argue that there is increasingly clear evidence that high SEL competency in students correlates to better academic performance.

Roger Weissberg is an education and psychology professor at the University of Illinois and the vice chair for the board of the Collaborative for Academic, Social, and Emotional Learning (or CASEL). Weissberg spoke with InsideSources about his work leading CASEL’s assessment work group, a committee that includes a number of highly cited researchers in the education field.

At first blush, the task appears to be complex. While checking to see if a student has mastered long-division can be done with a straight-forward standardized test, it is more difficult to get inside a student’s head to understand the nature of their learning-mindset, or getting objective data on how well they cooperate with their peers.

Most social emotional learning assessment systems currently in use revolve around teachers answering questionnaires about their students, self-reporting from the students themselves, peer and parent rating systems, and outside observation. While these tools can be helpful in the classroom, drawing broad conclusions from them is complicated by their subjective nature. In other words, there is the risk that two different teachers would give the same student two different scores on a social emotional learning survey.

More sophisticated and objective performance task measures are still, for the most part, either too expensive or still in development. CASEL’s assessment work-group is currently accepting entries into an SEL competence assessment design challenge, which Weissberg and his colleagues hope will advance the sub-field further in the coming months.

Nevertheless, the difficulties in gathering large-scale generalizable data partially explain why a recently released research brief, (whose authors include members of the CASEL work group), urged states not to immediately include SEL in their federal school accountability plans. While Weissberg agreed that the SEL measures are not suited for high-stakes accountability, he stressed that the current SEL yardsticks are ready for in-school implementation today.

“People have raised the question: ‘can a student’s Social Emotional Learning competence be measured reliably and validly?’ The answer is yes,” said Weissberg.

The challenge, he argued, is making sure that the data is then translated into evidence-based interventions in classrooms. In other words, once SEL data is collected, the focus needs to be on steering schools to support teachers to iterate and use the knowledge they’ve gathered about their students constructively.

Weissberg also argued that giving teachers effective training in how to assess their students for SEL competency goes a long way toward reducing the subjective elements of the assessment tools currently in use. Part of the problem is that new teachers are not receiving adequate background in child development, according to a report put out by CASEL. Once teachers have a solid footing in the area, and they know what to look for when answering survey questions, the data they collect gets much better, Weissberg said.

The researchers who argued against including SEL measures in high-stakes accountability, similarly voiced support for a locally-driven approach. The sense among SEL experts is that the tools should be used formatively to target improvements from one classroom to the next. If they go this route, school systems will see dividends in more established measures that reflect SEL progress indirectly, like lower chronic absence rates, stronger school climate surveys, and better teacher-retention numbers, said Weissberg.

“Our focus is asking ‘what can be done at the classroom and the school level?’” he explained.

Overall, Weissberg is buoyed by the positive results and growth in interest he has seen from parents, students, and educators.

“People are very supportive,” he said. “They feel [SEL] should be a part of education.”

That support has historically not always been as widespread as it is now. SEL was long thought by some to be the responsibility of parents and the community—putting it outside the direct purview of the classroom teacher. With increased funding, better measuring tools, and bold-faced educational names behind the SEL push, however, schools are likely to continue to adopt an emphasis on the growth of their student’s psychological well-being in their educational mission.