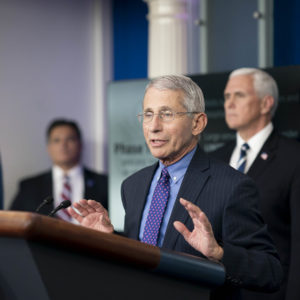 Stop the Blame Game on Coronavirus

Can we stop pretending?

Can we put an end to all the nonsense that the “experts” were urging drastic measures be taken long before President Trump “did anything?” It is beyond ridiculous, and will do nothing other than satisfy the thirst of the vast majority of the mainstream media to vilify the president.

Things happened in a hurry. Trump has followed the advice and counsel of Dr. Anthony Fauci and Dr. Deborah Brix at every turn.

When asked, Fauci specifically said: “The president has listened to what I’ve said and to other people who are on the task force. When I’ve made recommendations, he has taken them. He has never countered, overridden me.”

On the specific matter of social distancing, Fauci stated: “The first and only time that I went in and said we should do mitigation strongly, the response was, ‘Yes, we’ll do it.’”

If Trump was supposed to be listening to the experts, and these doctors are at the head of the class, maybe we need to stop accusing the president or anyone else involved in dealing with this unprecedented situation of not having the right intentions.

None of this is intended as criticism of Fauci, but we must realize that even his thinking has evolved. So too has the media’s, despite its attempts to gaslight us.

The reality is this. The United States turned from a nation being told “be careful out there” to one enduring shelter in place or stay at home in a mere week.

On February 25, Fauci expressed the view that social distancing was not “absolutely necessary” at that point. On February 29, with the caveat things were fluid, he said “there is no need to change what you are doing on a day-to-day basis.”

On Wednesday, March 11, the NBA announced it was postponing the playing of games. On Thursday, the PGA held the first round of the Players Championship in Florida. The next day the event was canceled, and PGA announced a suspension of tournament play. The same Friday, the NCAA canceled March Madness.

Still on Sunday, March 15, Fauci backed away from advising people to cease going to restaurants describing that as being “overkill.” He did not see a need to put a ban on domestic travel.

Also, on Sunday, the Centers for Disease Control and Prevention urged Americans to not gather in groups of 50 or more for a period of at least eight weeks. Millions of Americans did the math and knew that meant an Easter without a sanctuary.

The very next day, Monday, March 16, the president’s task force increased the degree of mitigation. It emphasized the need for social distancing and lowered the number of people who ought to be in one place to 10.

Further, Americans were urged to shelter in place to the maximum degree possible. When it comes to social interaction, that is covering a lot of ground at a breathtaking speed.

Until there is a vaccine available and administered on a near universal level, it is hard to not imagine practicing some degree of social distancing to avoid further disaster to both human health and our economy.

In the meantime, the media should stop rewriting history to suit a narrative of Trump being the bad guy. He is not. Neither are any of the experts who evolved their thinking during this unique situation.

The truth is everyone on the playing field is doing their best. That should be enough for everyone.