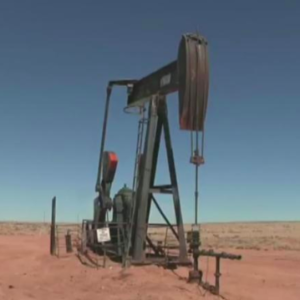 However, the oil and gas industry says it’s been working on ways to reduce its operations’  impact on the state’s water supply for years, without the need for further federal regulation — and the CAP report claiming water is scarce is not news to people who live in the Land of Enchantment.

The CAP report, “Oil and Gas Development Is Creating a Problem for the Arid West,” says that in New Mexico, 387 of 402 oil and gas leases — more than 95 percent — are located in “extremely high” water-stress areas.

The Permian Basin, which runs through southeastern New Mexico, is one of the largest energy-producing regions in the world. Leasing activity has been at an all-time high, and up to 2.6 million gallons of water are used to extract oil from a single well in this region, according to the report.

The report also notes that New Mexico faces water stress that equals “the 10th-most water-stressed country in the world, the United Arab Emirates.”

The author of the study, Jenny Rowland-Shea, writes that the U.S. Bureau of Land Management, which supervises federal land use in the West, should enact stricter policies to protect watersheds from the impacts of oil and gas.

“The BLM has not developed adequate guidance for how the agency should take water impacts into consideration for oil and gas leasing decisions,” Rowland-Shea wrote. “As a result, the agency is inconsistent in whether and how it weighs the potential impacts on water quantity and quality in environmental analyses and resource management planning.”

Robert McIntyre, spokesman for the New Mexico Oil & Gas Association (NMOGA), says how the industry manages water has been of concern “not just today, not just last month and not just last year.”

“That someone outside of New Mexico on the East Coast would tell someone in the West that water is in short supply is ironic because that is something that we live with each and every day,” McIntyre told InsideSources. “So this report is not delivering any  groundbreaking conclusions that the industry and generations of New Mexicans have already had to deal with.

“Water is a precious resource not just here in New Mexico, but throughout the West and I think every industry — not just oil and gas — takes great care in the way that they manage their water resources and wants to make sure that we’re maximizing in reducing waste.”

The NMOGA spokesman says the CAP report is a “poor representation of what’s happening on the ground.”

“The industry has invested in new technology to reuse water, to recycle water, to ensure that we are cutting down on our reliance and dependency on freshwater whenever possible,” McIntyre said. “And we really have some operators in New Mexico who report that 90 percent of their water resources are coming from recycled or retreated sources. The water that they’re citing that is used per well, only a fraction of that water in reality is freshwater.

Meanwhile in Congress, New Mexico U.S. Sens. Tom Udall and Martin Heinrich introduced The Western Water Security Act of 2019 late last month, to improve water management in the West through investments in water infrastructure, with a focus on conservation, efficiency and environmental restoration. A companion bill was introduced in the U.S. House by Reps. Xochitl Torres Small, Ben Ray Luján and Deb Haaland.

“It is past time that Congress address this problem, which is hitting our most vulnerable communities the hardest, to ensure that future generations can sustain life in the American West,” Udall said. “In New Mexico, we know how vital water is to preserving our economy, our environment, and our way of life.”

Heinrich said “in New Mexico we know water is life.”

“Particularly in an era of prolonged droughts and climate disruption, we must use the best available science to protect and conserve our limited freshwater supplies,” he said. “I’m proud to support this legislation to make smart investments in watershed restoration, scientific research, and infrastructure that will help our communities use water more efficiently.”