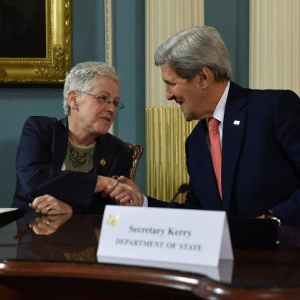 A new study published Thursday finds new ozone standards under consideration by the Environmental Protection Agency (EPA) would, on an annual basis through 2040, reduce GDP by $140 billion, result in 1.4 million fewer jobs, and cost the average US household $830 in lost consumption.

The study finds this would be the costliest regulation in US history.

This is a revised analysis of a study conducted last July that examined the potential costs of reducing current ozone standards from the 2008 level of 75 parts per billion (ppb) to 60 ppb. In November, the EPA announced it was weighing a range from 65 to 70 ppb. Based on this change, NERA Economic Consulting, commissioned by the National Association of Manufacturers (NAM), revised the July report to reflect higher ozone levels, though the EPA is still accepting public comment on lower levels.

“Manufacturers in the United States are in the midst of a resurgence that’s fueling job growth and economic recovery nationwide, but the proposed tightening of the ozone standard puts our momentum at great risk,” NAM President and CEO Jay Timmons said. “This data confirms our long-held concern that revisions to the ozone standard represent one of the most significant threats, not just to our manufacturing sector, but to our economy at large.”

Current ozone levels are near those that occur naturally in the atmosphere. The 2008 levels have still not been fully implemented. On Wednesday, in a House EPA budget hearing, EPA Administrator Gina McCarthy said she saw no problems with passing overlapping standards.

NAM argues that 65 ppb is “unattainable regulation.” The report notes: “More than 60 percent of the controls and technologies needed to meet the rule’s requirements are what the EPA calls ‘unknown controls.’ Because controls are not known, the new regulation could result in the closure of plants and the early scrappage of equipment used for manufacturing, construction and agriculture.”

In a statement to InsideSources, the EPA spokesperson Liz Purchia said: “Based on the Administrator’s evaluation of more than 1,000 new studies since the last review, she believes that a standard in the proposed range will provide substantial public health benefits for millions of Americans by reducing both ozone and particle pollution. EPA estimates that reducing pollution to meet the standards in 2025 will yield annual health benefits of $6.4 to $13 billion annually for a standard of 70 ppb, and $19 to $38 billion annually for a standard of 65 ppb, except for California. This includes the value of preventing harm to health that includes, among other effects: 750 to 4,300 premature deaths; 790 to 2,300 cases of acute bronchitis in children; 1,400 to 4,300 asthma-related emergency room visits; 320,000 to 960,000 asthma attacks in children; 65,000 to 180,000 days when people miss work; and 330,000 to 1 million days when children miss school.”

Earlier this month, Senators John Thune (R-SD) and Jim Inhofe (R-OK) questioned the EPA on its decision to revise the expected economic impact projections for the rule at 65 ppb. In 2011, the EPA had studied the costs of a similar rule and come to different conclusions. That proposed rule was never implemented. At that time, President Obama asked the EPA to abandon its plans because of his Administration’s efforts to “underscore the importance of reducing regulatory burdens and regulatory uncertainty.”

The Senators wrote in a letter to the EPA’s McCarthy: “We do not believe the staggering economic costs of a lower standard have improved since 2011. Rather, the EPA’s regulatory impact analysis is intentionally misleading in its incorporation of additional proposed regulations… which significantly impact forward year ozone forecasts and obfuscate the cost of compliance.”

The NERA/NAM study foresees much different results than the EPA. “This updated analysis of our July 2014 report reaffirms that attaining a stricter ozone standard would require compliance costs at levels well beyond what EPA has admitted, and beyond what we have ever estimated for any other EPA regulation. Costs of this magnitude would clearly leave their mark on the U.S. economy,” said NERA Senior Vice President and Environment Practice Co-Chair Anne Smith.

The EPA also noted in its response: “EPA’s proposal is about setting a health standard and determining that level. By law, we cannot consider costs in doing so.”

The full study is available online.