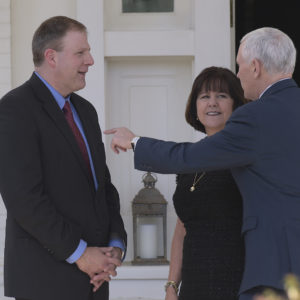 New Hampshire Gov. Chris Sununu, left, talks with Vice President Mike Pence, right, and his wife Karen Pence as he arrives for a luncheon with other governors at the Naval Observatory in Washington, Friday, Feb. 24, 2017. (AP Photo/Susan Walsh)
News

When it comes to Medicaid expansion in New Hampshire, Gov. Chris Sununu is in a tight spot. It’s not just him, actually. A lot of Republican governors across the country are having a difficult time figuring out how to balance the “repeal and replace” rhetoric on Obamacare within their party, while also seeking to protect certain provisions of the health care law, like Medicaid, that help the residents of their states.

It’s a balancing act that Sununu, the first GOP governor in the Granite State in 12 years, waded into last week. He said in its current form, he’s not “signing on” to the House Republicans’ American Health Care Act due to his concerns over Medicaid funding and coverage.

“The bill that’s been proposed in Congress gives us concerns on a lot of different levels,” Sununu said on Tuesday. “Expanded Medicaid is part of that discussion. There’s no doubt expanded Medicaid has provided [drug] recovery, treatment options for a lot of folks that otherwise may not have had that option available.”

The Congressional Budget Office estimates that $880 million less in federal money would be spent on Medicaid over the next decade. The Republican plan phases out the program by 2020 with states receiving funding for existing expansion recipients as long as they maintain continuous Medicaid coverage.

The Medicaid provisions in the Republican’s bill are reigniting a longstanding debate between conservatives and moderates of the party. Conservatives are critical of the program’s cost and performance, while moderates are worried that cuts to the program will result in a loss of funds in their state’s budget, leaving patients without help.

Sununu falls into the latter category. He has previously indicated his support for Medicaid expansion, yet doesn’t want to make the program permanent. He’s waiting to see how the Medicaid battle plays out in Congress before taking any action in the state.

New Hampshire was one of 31 states that expanded Medicaid under former President Barack Obama’s Affordable Care Act. Former Democratic Gov. Maggie Hassan, now a U.S. senator for the state, signed the plan into law in 2014 after working with Republican legislators to approve it in two-year increments. She signed the latest expansion bill in 2016, with the program scheduled to expire at the end of 2018. New Hampshire has more than 187,000 individuals enrolled in either traditional or expanded Medicaid, according to state health officials.

During Sununu’s 2016 gubernatorial bid, he said extending the state’s Medicaid program until 2018 was “probably a good step forward,” but lawmakers shouldn’t keep doing it every two years.

“I like the idea that we’re moving forward without any tax payer burden, any tax burden on the taxpayers back,” he told NH1 News in February 2016. “We have essentially a public-private partnership helping to fund it as we move forward, and those are very positive steps. What I would like to see is a long term strategy for this state, not simply taking it in two- or four- year chunks.”

Democrats attempted to paint him as opposing Medicaid expansion because of his 2014 Executive Council vote against a $292 million state contract to implement Medicaid expansion. However, the item was added to the agenda at the last minute and he tried unsuccessfully for a two-week delay to fully understand the contract. He said the council shouldn’t vote on something that hasn’t been read thoroughly.

Yet, throughout the campaign, he was ambiguous about his plans for the future of Medicaid in New Hampshire. He didn’t indicate if he was supportive of extending past 2018 or would support an outright repeal of the program.

Those in New Hampshire who were concerned about Medicaid’s future were also not consoled by a letter Sununu sent to Congressional GOP leadership in January. With Republican President Donald Trump in the White House and GOP majorities in the U.S. House and Senate, it appeared that the repeal of Obamacare was imminent.

As a result, Sununu sent a letter to U.S. House Majority Leader Kevin McCarthy, urging Congress to give states as much flexibility as possible to design their own health care systems.

“We urge Congress to untie the hands of the States,” he wrote in the letter. “Let us have the flexibility to design a New Hampshire system for New Hampshire citizens.”

However, his letter left out any mention or comment on Medicaid expansion.

It wasn’t until February that Sununu became more clear on what he thinks about the program. He said “there’s no doubt that it’s [Medicaid expansion] been helpful.”

“It was a price tag of somewhere between $400 and $500 million,” he told NHPR. “We’ve been able to do it to date without a single New Hampshire taxpayer dollar. No state taxes go into it.”

Later that month, he expanded on what he wanted to see from Medicaid in the GOP’s health care plan.

“When we hear the term block grants coming out of Washington, especially with healthcare, the opportunities are tremendous for us,” he said at a meeting of the Concord Chamber of Commerce. “We spend tens of millions of dollars on the state level on things we simply don’t need. So give us a block grant.”

When Republicans initially rolled out their health care plan, block grants weren’t included. The House plan focused on paying states a fixed per-capita amount to cover their population based on their average expenses, but a Republican amendment to the bill allowed the option for states to choose a Medicaid block grant in lieu of the capped reimbursement model.

Under current health care laws, when an eligible person enrolls in Medicaid there are matching federal funds to ensure that they get care. The block grant proposal caps that federal share, letting states decide how to spend the dollars on care. However, many health care professionals say capping Medicaid funding in block grants could hurt access to quality health care for the poor, children, and elderly by cutting the amount of federal dollars available.

It’s not immediately clear if Sununu approves of the most recent, updated version of the American Health Care Act, but Sununu said he would work with Trump to to ensure that the bill gives states the opportunity to create “flexible” and “nimble” health care program.

Democrats in the state, including Hassan, believe block grants would fail to sustain the expanded Medicaid program. It’s a position that’s shared with many advocacy groups, including AARP, which released a “fact sheet” last week about how changing Medicaid to a block grant or per capita cap could hurt New Hampshire residents.

“The House bill will impact health care seriously, but what it would do to Medicaid expansion … it would in fact repeal it,” Hassan said at a press conference last week. “That [block grants] will make health insurance out of reach for thousands of Granite Staters, and it hurts the ability of those on the front lines to save lives and fight this [opioid] epidemic.”

New Hampshire has one of the highest drug overdose death rates in the country. Nearly 500 people died from drug overdoses in 2016 and approximately 6,000 Medicaid expansion recipients have accessed treatment, state health officials said.

Sununu, and other state Republican leaders, believe block grants will allow them to allocate the money to places that need it most, such as towns hardest hit by the opioid crisis. Yet, some policy experts argue that block grants will severely strain state budgets and leave states vulnerable when they have to deal with unexpected issues, like drug outbreaks that raise the average cost of treating individual patients.

Sununu said he has spoken with Trump and Vice President Mike Pence about the importance of Medicaid with treatment and recovery for the opioid crisis, and how that requirement should continue under the GOP plan.

The N.H. Senate tabled a bill Thursday, without debate, that would make Medicaid expansion permanent. The senators said they wanted to wait to see what will happen at the national level before they tackle it in the state.

As conservatives and moderates battle it out on Medicaid provisions in the GOP health care bill, it appears New Hampshire, and Sununu, will wait for the dust to settle.